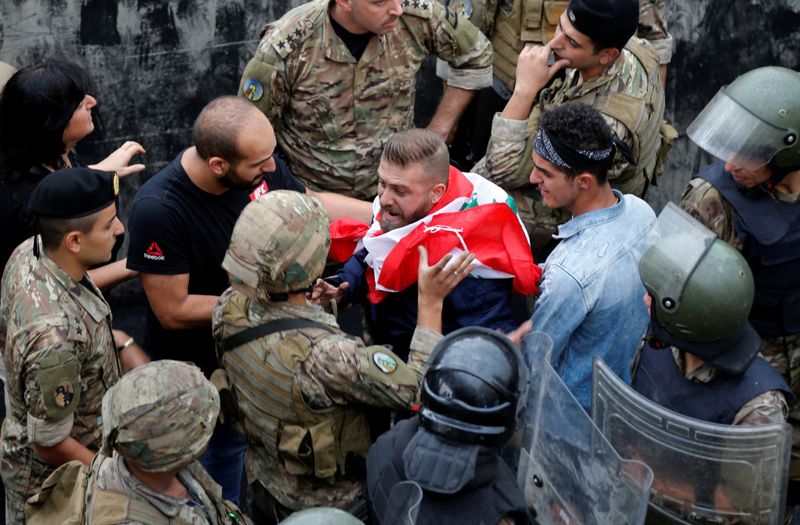 Army scuffles with a protester on the highway in Jal el-Dib.
Share:

Lebanon’s currency continued to depreciate Monday with hundreds of protestors taking to the streets to denounce deteriorating living conditions as opposition parties accused the Hezbollah-led government of undermining the country’s free-market economy.

The arrests come days after Prime Minister Hassan Diab vowed that “the state will strike firmly against those who think that we’ll stand idly by as they plot to steal people’s money by hiking the dollar exchange rate.”

The Lebanese pound has sunk to record lows in the midst of a financial, monetary and banking crisis, unseen even at the height of the 1975-90 civil war.

This has brought the government and the banking sector at loggerheads, with banks labeling the former’s recently leaked reform plan as “a strategy of assigning blame for the financial crisis to the banking sector.”

Commercial banks were at the core of the plan, which notes that “a positive net capital position upfront would entail important losses to be incurred up front by depositors through the banking sector (bail-in).”

Last month, Lebanon’s financial prosecutor froze the assets of 20 Lebanese banks as well as the properties of the banks’ CEOs and board members but his decision was later reversed by the country’s top prosecutor. Another blow, however, was delivered Monday, after a judge in Tyre issued a travel ban targeting BLOM Bank’s chairman and board members.

The decision follows a lawsuit filed against the bank for denying a depositor’s request to withdraw funds “to pay for his ill mother’s treatment.”

Central Bank governor Riad Salameh has been at the receiving end of most of the backlash in recent days, with Diab alluding to “suspicious ambiguity” in his handling of Lebanon’s monetary situation.

“There is suspicious ambiguity in the Central Bank governor’s performance as to the lira’s dramatic deterioration,” Diab said.

“There are gaps in the central bank’s performance, strategies, clarity and monetary policy and the bank’s losses have reached USD 7 billion this year,” he said, adding that “the Central Bank is either incapable, absent or directly inciting this dramatic depreciation.”

The state must now “correct these mistakes,” Bassil said, before denying that this would constitute a “coup against the free financial system or central bank independence”.

The pound has lost more than 60 percent of its value since October as Salameh scrambled to issue a slew of circulars to regulate both lira and dollar withdrawals.

Earlier this week, Salameh ordered local banks to convert cash withdrawals from foreign currency accounts to the Lebanese pound, at a market rate to be determined daily by the banks. The rate for this week has been set at 3,000 pounds per dollar, sources told Annahar. “Fresh” deposits, however, can be freely used by clients.

The heap of decisions has caused confusion among Lebanese, who are now faced with over three exchange rates for their struggling currency.

“I’ve contemplated going back to school to cope with all this information,” a depositor jokingly told Annahar.

House Speaker Nabih Berri jumped Sunday to the defense of Salameh, telling Annahar that Lebanon could not afford to remove the governor just as it was entering negotiations with foreign bondholders after defaulting on debt obligations last month.

“Lebanese will wake up to the price of the dollar at 15,000 pounds,” Berri said. “I am not defending Salameh or anyone, I am defending Lebanon. And if the central bank of Lebanon does not remain, then everyone knows that depositors’ funds are gone forever.”

The tug of war between the government – made up of the March 8 coalition – and the now-defunct March 14 bloc also took another twist after Progressive Socialist Party leader Walid Jumblatt accused on Sunday Hezbollah and Aoun of attempting to eliminate their political opponents.

“Prime Minister Hassan Diab is a nobody. General Aoun has resumed the policy of elimination that he started in 1988,” Jumblatt said in an interview with Saudi TV Al-Arabiya. “We will not accept our elimination by Hezbollah or by others. Those accused of corruption have no right to direct accusations at us.”

Jumblatt added that he would counter “peacefully and constitutionally” in courts, “provided that everyone is held accountable under Lebanon’s laws.”

“Salameh made a mistake but he is not responsible for the waste of $50 to $60 billion on electricity,” Jumblatt said, referring to the losses incurred by Lebanon’s state-owned power company under Bassil’s FPM for the better part of a decade.

“The state, with its centralized components, especially the Free Patriotic Movement, imposed this high bill on us. Nobody in this government so far – not even Hassan Diab – has had the courage to touch the electricity sector.”

Former Prime Minister Saad Hariri, who was also ousted from the government after failing to come to terms with the FPM, Hezbollah and their allies, also launched a scathing attack at both Bassil and Diab on Sunday.

The similarity between Diab and Bassil’s remarks, he said, “confirms the presence of a single operations room which is orchestrating the ongoing coup,” he said in a statement.

“What transpired last week prove that Lebanon’s “appointed” premier has decided to stand by President Michel Aoun, and consequently behind the real and shadow president Gebran Bassil, and to assist them in implementing the spiteful agenda that they have been seeking since 2005,” Hariri said.

In the midst of all the bickering and finger-pointing, hundreds of Lebanese attempted to block roads and main highways across Lebanon Monday in response to their crumbling standards of living.

Burning tires became once again a common sight since the late hours of Sunday night, with security forces scrambling to reopen key highways and roads across Lebanon.

The Lebanese Army was also deployed in key areas to prevent protesters from gaining a foothold, occasionally scuffling with them to hold them back.

A coronavirus lockdown, coupled with hyperinflation and a depreciating currency, has pushed almost two million Lebanese under the poverty line, according to recent estimates.

Living costs have risen by as much as 45 percent in the last quarter of 2019 in a country where 70 percent of consumer goods are imported amid dwindling foreign currency reserves.