Hubble celebrates 30 years in space with this stunning new image 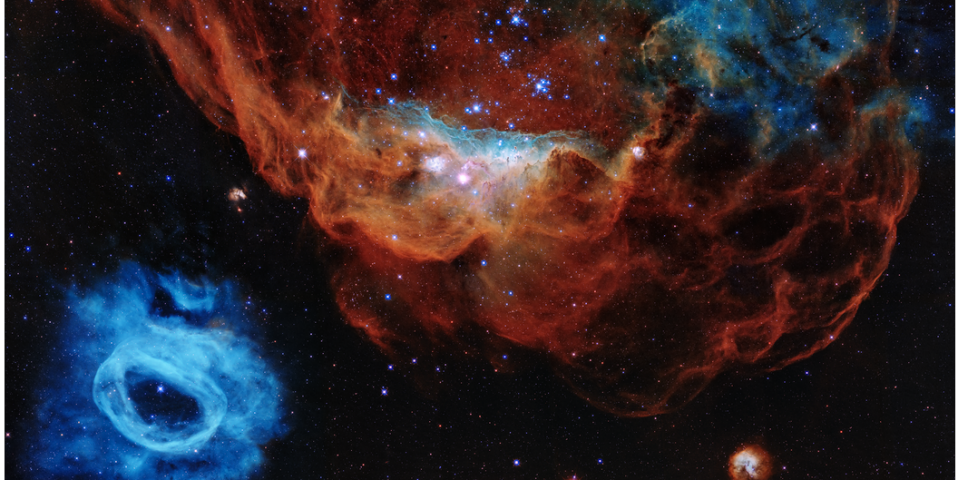 Hubble Telescope turned 30 last week, and NASA is celebrating Hubble’s decades-long journey through space with a stunning new image of a starbirth.
Share:

The Hubble Space Telescope was launched into orbit on April 25, 1990, and has spent the last 30 years changing our understanding of the universe. To this day, the images that the Hubble Telescope capture allow scientists to constantly learn more and more about the cosmos. Last week, the iconic Hubble Telescope turned 30, and NASA is celebrating Hubble’s decades-long journey through space with a stunning new image of a starbirth.

Last Friday, NASA released a colorful new portrait that the Hubble captured. The image shows the giant red nebula, NGC 2014 and its blue neighbor, NGC 2020, in a galaxy of the Milky Way located 163,000 light-years away. Some of the stars of the red nebula are 10 to 20 times bigger than our sun. And a star 200,000 times brighter than our Sun created the blue nebula. The image is nicknamed the “Cosmic Reef” since it looks like a cosmic undersea world.

NASA is also celebrating Hubble’s birthday by releasing a new online tool that lets you see what the Hubble Telescope saw on your birthday. All you’ll need to do is type in the month and day of your birthday here to see the *stunning* image that the Hubble Telescope captured on your special day over the years. You won’t be asked to input your birth year, as there isn’t a photo assigned to every day of every year. The tool will instead show you the best photo ever captured on that date within the last three decades. While I was born in the ’90s, the image that generated for my birthday on July 21 was captured in 2004. I was treated to an image of two merging spiral galaxies, known as Antennae galaxies, which I learned from the included description. And not to brag, but the two spiral galaxies that came together on my ninth birthday resulted in the formation of billions of stars, so I’m feeling pretty special. Claps for us, cancers!

While you can’t nail down exactly what the Hubble saw on the day you were born, it’s still a super fun tool to play around with. You can access the tool here. Want more? NASA also released a podcast for the Hubble Telescope’s 30th birthday. You can also marvel at some other images the Hubble Telescope captured in the Caldwell catalog. I think this goes for all of us when I say: keep being out of this world, Hubble.