Protests as Lebanese Lira crashes and dollars no longer dispensed 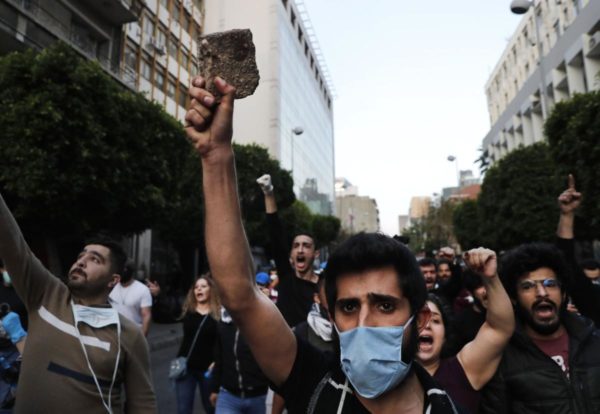 file photo : Protesters in Lebanon broke the rules of the government-imposed lockdown and gathered outside the Central bank in Hamra street in Beirut calling on Lebanese Central Bank’s governor Riad Salameh to step down . Salameh’s so called Ponzi scheme was blamed by UN chief for the financial collapse of Lebanon . Lebanon’s financial collapse was caused by “something similar to a Ponzi scheme”, UN Secretary General Antonio Guterres said in videotaped comments made during a closed-door meeting on his visit to Beirut this week. Salameh has been on the job for 30 years and holds the secrets of the state, as well as secrets of the political elite who stand accused by the public for the economic meltdown which has been termed by the World Bank as the worst decline of any country since 1850. 12/21/ 2021
Share:

Hundreds of angered Lebanese protesters went on the streets for the third consecutive day as the exchange rate of the Lebanese pound recorded its biggest drop against the US dollar.

Protesters broke the rules of the government-imposed lockdown and gathered outside the Central bank in Hamra street in Beirut calling for step down of the Lebanese Central Bank’s governor Riad Salameh.

No more dollars in Lebanon

Earlier during the day, hundreds of Lebanese – most wearing face masks but few keeping a safe distance – crowded outside money transfer houses Thursday, the last day they are allowed to dispense dollars to customers following new Central Bank rules.

According to a Central Bank circular issued this week, money transfer houses and banks are required to convert foreign currency transfers and cash withdrawals from foreign currency bank accounts to local currency at a market rate determined daily by the bank.

The new circular is meant to ease the demand on the dollar.

But instead, the central bank circular caused a panic among Lebanese who have relied on a stable currency pegged to the dollar for nearly 30 years.

The small country of about 5 million has a large diaspora that sends foreign currency home or relies on transfers from here for students abroad. Many Lebanese keep their savings in foreign currency.

The Lebanese lira traded between 3,500 and 3,700 to the dollar on Thursday, a sharp jump amid a general downward trend of currency depreciation that began in March.

The Lebanese lira has been pegged to the dollar at 1,500 pounds since 1990, the end of the country’s civil war.

Lebanon is facing its worst economic crisis in decades, including unprecedented unemployment levels and a severe liquidity crunch.

The crisis has been compounded by a nationwide general lockdown in place for over a month to combat the spread of coronavirus.

The latest measure announced by the central bank allowing cash withdrawal of the local currency at the black market rate, seen as an effective floating of the currency, appear to have deepened the panic.

Lebanese had taken to the streets since October denouncing the government and banks for their inability to address the liquidity crunch and the general economic malaise and accusing them of corruption. The coronavirus pandemic only intensified the economic slump.

“It is a game,” said Youssef Abdel-Al, who stood in line outside a money transfer house in Beirut, accusing the banks and the political class of ignoring people’s rights.

The Cabinet is expected to meet on Friday to discuss an economic and financial rescue plan that has sparked a political debate.

Lebanon, which has recorded 22 deaths from 688 reported coronavirus cases, has been in lockdown since mid-March, a measure that will likely be extended. The national airport and the country’s borders have been shut, as well as public institutions, restaurants and schools.