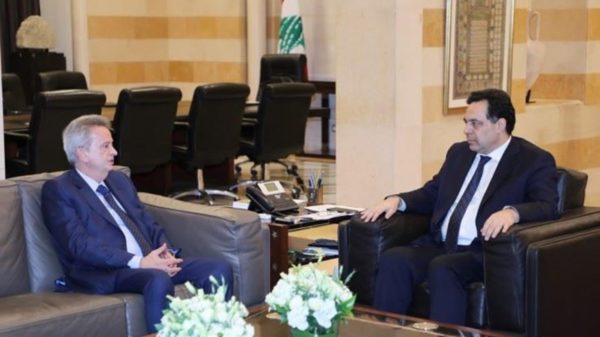 In the first two months of the year Lebanese bank deposits have plunged $5.7 billion despite curbs on withdrawals and a ban on transfers abroad. This is in addition to the $2.3 billion that were transferred abroad last year after the start of mass protests on October 17 against the ruling elite. Central bank losses from the start of the year to mid-April have reached $7 billion, including $3 billion in the past four weeks alone, Lebanon PM Diab said in a televised address as he was addressing the recent crash of the Lebanese pound which resulted in the loss of 60 % of its pegged value .

BEIRUT, LEBANON- Prime Minister Hassan Diab said Friday that Lebanese bank deposits have plunged $5.7 billion in the first two months of the year despite curbs on withdrawals and a ban on transfers abroad.

Lebanon is grappling with a severe lack of liquidity and its worst economic crisis in decades, compounded since mid-March by a lockdown to stem the novel coronavirus.

Banks have gradually restricted dollar withdrawals until halting them altogether last month, and transfers abroad have been banned.

But reports have circulated of persistent capital flight, the latest announced by Diab during a televised speech on Friday.

“Figures reveal the exit of $5.7 billion worth of deposits from Lebanese banks in January and February this year” alone, the premier said.

A source close to the government said the large part of the $5.7 billion had likely been transferred abroad.

“Some portion of that was withdrawn and likely kept in households within Lebanon,” the source said.

But “given that over the counter withdrawals were limited to relatively small amounts during that time period, one can logically conclude that a big portion of the $5.7 billion left the country,” the source said.

According to official estimates, $2.3 billion were transferred abroad last year after the start of mass protests on October 17 against a political class demonstrators accused of being corrupt and inept.

The Lebanese pound has been pegged to the dollar since 1997, but in recent months it has lost more than half its value on the parallel exchange market.

Diab criticised the central bank and called on its governor Riad Salameh to “come forward to announce the honest truth to Lebanese”.

He urged the governor, who has held the post since 1993, to explain his plans and when the exchange rate would stop rising.

Central bank losses from the start of the year to mid-April have reached $7 billion, including $3 billion in the past four weeks alone, Diab said.

The premier said a “neutral international company” had been tasked to audit the central bank’s books, without giving a name.

Salameh’s supporters credit him for stabilising the Lebanese pound for more than two decades, in the wake of the country’s 1975-1990 civil war.

But his detractors accuse him of having contributed to Lebanon’s endless borrowing and ballooning sovereign debt, leading to the country’s first ever default in March.

In recent months, the Lebanese pound has plummeted in value from around 1,500 pounds against the US dollar to almost 3,800 on the parallel market.

Economist Jad Chaaban said factors such as Lebanon’s sizeable informal economy and the coronavirus lockdown that has impeded the influx of dollars in cash have contributed to the crash of the pound.

He also faulted a banking control commission over its monitoring of the exchange rate.

Lebanon is one of the most indebted countries in the world, with a debt equivalent to 170 percent of its gross development product.