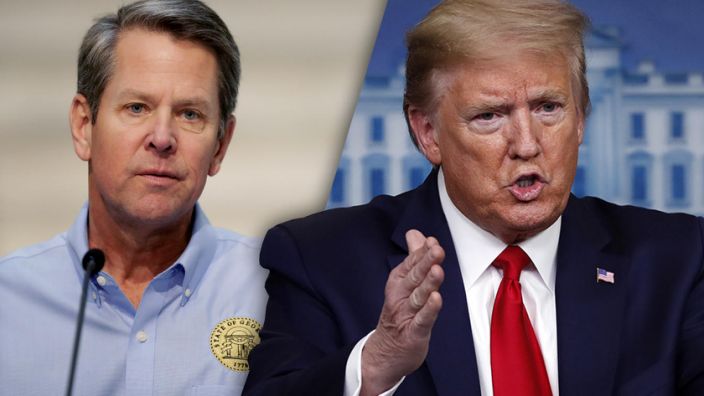 President Trump said Wednesday that he opposes Georgia Gov. Brian Kemp’s controversial decision to allow some non-essential businesses to reopen despite a high number of confirmed COVID-19 cases in the state.
Share:

Georgia Republican Gov. Brian Kemp was already taking loads of incoming — both in the state and nationally — for his deeply controversial decision to begin reopening his state on Friday. He thought that President Donald Trump, a key ally from whom Kemp has taken his cues on how to deal with the virus, was on his side.

Yeah, not so much. Here’s Trump on Wednesday night — just hours after he had, according to a source, called Kemp to express his support for the reopening decision:

“I told the governor of Georgia, Brian Kemp, that I disagree strongly with his decision to open certain facilities which are in violation of the phase one guidelines for the incredible people of Georgia. They’re incredible people. I love those people. They are — they’re great. They’ve been strong, resolute.

But, at the same time, he must do what he thinks is right. I want him to do what he thinks is right, but I disagree with him on what he’s doing. But I want to let the governors do — now, if I see something totally egregious, totally out of line, I’ll do. But I think spas and beauty salons and tattoo parlors and barbershops in phase one — we’re going to have phase two very soon — is just too soon. I think it’s too soon.

“And I love the people. I love — I love those people that use all of those things: the spas and the beauty parlors and barbershops, tattoo parlors. I love them. But they can wait a little bit longer. Just a little bit. Not — not much. Because safety has to predominate. We have to have that. So I told the governor, very simply, that I disagree with his decision, but he has to do what he thinks is right.”

Now, I have seen a lot of things in politics. And I have seen one politician throw another under the proverbial bus. But I have never seen it happen that badly — especially when the stakes are so high.

Consider what Trump did in those few sentences:

1) Made clear that Kemp does not have his support for reopening parts of the state’s economy, providing him plausible deniability if things turn bad

2) Said Kemp is free to make his own decisions, even if those decisions are — in Trump’s mind — very bad and wrong

3) Made sure the people of Georgia know he loves them very much, especially those who use nails salons and tattoo parlors

It’s an absolutely remarkable bit of political blaming — made all the worse (or better depending on where you stand) by the fact that Kemp likely went into Wednesday night’s coronavirus task force press briefing believing that, even while criticism was mounting, he still had Trump’s support to fall back on. It’s like a trust fall exercise where the person behind you assures you they will catch you and then not only lets you fall but stomps on you when you are on the ground.

For Kemp, it’s a painful lesson to learn: Loyalty is a one-way street for Trump. Trump expects totally fealty — he was not happy with Kemp when the governor passed over Rep. Doug Collins for the appointment to Georgia’s vacant Senate seat — and feels no real need to reciprocate. You need to be loyal to him. He will be loyal to you — as long as it serves his interests.

Georgia Sen. Kelly Loeffler, who did win Kemp’s appointment to the seat, made clear exactly how awkward this whole situation is by putting out a statement that attempted to agree with both Trump and Kemp.

“Of course I support President Trump and I’m proud to serve on his Task Force to re-open America,” she said. “And obviously, I support Governor Kemp and his efforts to begin to get Georgians back to work safely.” But you can’t do that! Because Kemp and Trump support different things when it comes to what’s best for Georgia residents!

The fact is that being on the record as supporting Kemp’s decision to reopen some state business on Friday is simply not a good look for Trump. The influential model created by Institute for Health Metrics and Evaluation at the University of Washington suggests Georgia won’t hit its peak number of daily deaths until April 29 and that not until after June 22 — almost two months from now! — will “relaxing social distancing” measures be appropriate.

Given that data, it’s a political no-brainer for Trump to saw off the branch that Kemp has walked out on. If Trump was on record as supporting Kemp’s decision and, unfortunately, Covid-19 cases began spiking within a few weeks of reopening the state, the blame would be shared by both the governor and the President. Now, with his statement on Thursday, if the worst-case scenario happens, Trump can say something like It’s a horrible situation down there in Georgia but you’ll remember I told the governor I didn’t think he was doing the right thing.

With Trump pulling the rug out from under him, the question now is what Kemp will do. He’s got less than 24 hours before his planned reopening of Georgia’s economy begins. Does he plow forward under the idea that he’s still doing the right thing — even if the data and the President say he isn’t? Or does he try to find a way to claw back his plan? If so, how?