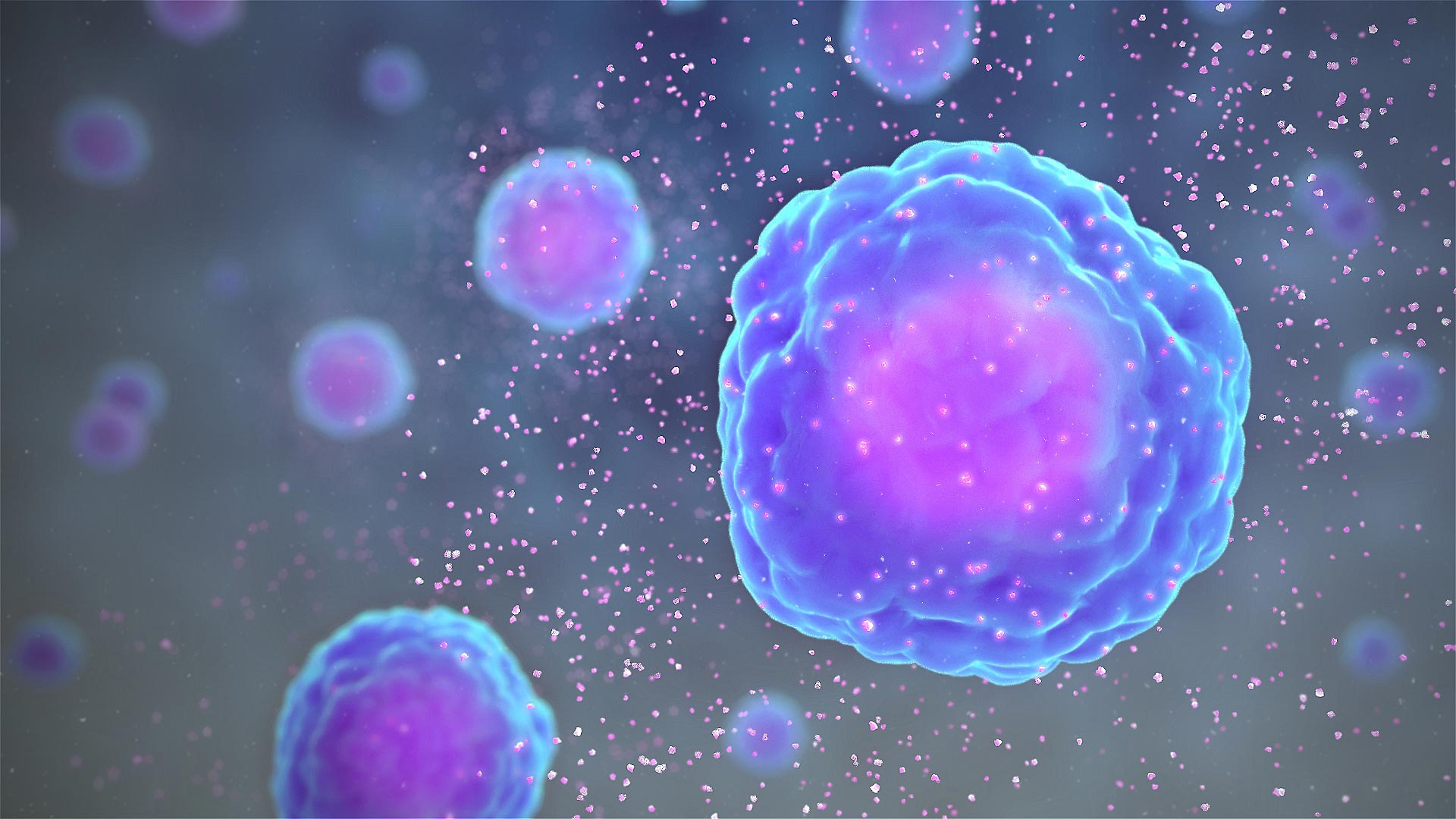 Shuguang Zhang, a scientist in MIT’s Media Lab, has been developing antibody-like proteins that can fuse to cytokine receptors and potentially block a “cytokine storm,” which is an excessive immune response that can occur during viral infections. This rendering depicts the secretion of cytokines, the tiny pink bits, from a cell. Credit: Scientificanimations.com, CC BY-SA 4.0
Share:

Team designs antibody-like receptor proteins that can bind to cytokines, as possible strategy for treating coronavirus and other infections.

One of the defining features of Covid-19 is the excessive immune response that can occur in severe cases. This burst of immune overreaction, also called a cytokine storm, damages the lungs and can be fatal.

A team of MIT researchers has developed specialized proteins, similar in structure to antibodies, that they believe could soak up these excess cytokines.

The researchers have reported their initial findings in the journal Quarterly Review of Biophysics (QRB) Discovery, and they now hope to begin testing their proteins in human cells and in animal models of cytokine release and coronavirus infection.

Shuguang Zhang, a principal research scientist in the MIT Media Lab’s Laboratory of Molecular Architecture, is also a senior author of the paper. Shilei Hao, a visiting scientist at MIT, is the lead author of the study, and David Jin, CEO and president of Avalon GloboCare, is also an author.

The researchers’ work on blocking cytokine storms grew out of a project that Zhang began 10 years ago to develop modified versions of membrane-embedded proteins. These proteins are usually difficult to study because once they are extracted from the cell membrane, they only maintain their structure if they are suspended in special types of detergents.

After working on the problem for several years, Zhang and Qing developed a method for modifying the hydrophobic regions of these proteins, making them soluble in water and much easier to study. Their method, called the QTY code, calls for replacing some hydrophobic amino acids with hydrophilic amino acids that have similar structures. Leucine is converted to glutamine, isoleucine and valine are converted to threonine, and phenylalanine is converted to tyrosine.

This image shows schematic illustrations for Fc-fused QTY variant cytokine receptors with an antibody-like structure. These illustrations are not to scale and the receptor structures are significantly emphasized for clarity.​ Credit: Image courtesy of the researchers

Following the development of the QTY code, Jin approached Zhang’s lab with the idea of designing water-soluble versions of proteins known as cytokine receptors. These receptors are found on the surface of immune cells, where they bind to cytokines — signaling proteins that stimulate inflammation and other immune responses.

Jin believed that proteins that mimic these cytokine receptors could help combat cytokine storms, which can be produced by viral or bacterial infections, including HIV and hepatitis. They can also occur as a side effect of cancer immunotherapy.

In April 2019, Zhang’s team set out to design proteins that could sop up these excess cytokines like a sponge. To do that, they used the QTY code to make water-soluble versions of cytokine receptors. When proteins are soluble in water, they can travel efficiently through the human bloodstream, while the original, hydrophobic versions of the proteins would likely stick to cells that they encountered.

The researchers also attached an antibody segment called the Fc region to their water-soluble receptor proteins. This region helps to further stabilize the proteins in the bloodstream, and makes them less likely to be attacked by the immune system.

The researchers designed proteins that mimic six different cytokine receptors, which can bind to cytokines such as interferon and interleukin, as well as a class of cytokines called chemokines. In laboratory tests of the proteins’ binding strength, the researchers found that their modified proteins were able to bind to cytokines with similar strength as naturally occurring cytokine receptors.

“The cytokine receptors that we designed will soak up the majority of the excessive cytokines that are released during the cytokine storm,” Jin says.

In March, when evidence began to suggest that the SARS-CoV-2 virus was inducing cytokine storms in some patients, the researchers realized that the receptor proteins they had designed might be able to help. They decided to quickly publish the results they have generated so far, and they are now planning to do additional tests in human cells and in animal models of Covid-19 infection.

The potential usefulness of this approach underscores the importance of “curiosity-driven research,” Zhang says.

“As it turns out, our research initiated in April 2019 is directly relevant to the treatment of Covid-19 infected patients,” he says. “Curiosity-driven, or even proactive research often leads to preparedness, which is key to preventing future disasters.”

The researchers have filed for patents on the proteins that they designed, as well as on their overall approach to creating water-soluble cytokine receptors. They hope to license the technology quickly and to collaborate with pharmaceutical and biotech companies who can help to move it toward clinical trials.

“Obviously this approach will need further animal studies, and potentially human clinical studies,” Jin says. “But we have confidence that this discovery will contribute to clinical applications to address viral diseases that involve cytokine storms.”

The research was funded primarily by Avalon GloboCare, and also by a fellowship from the China Scholarship Council and Chongqing University, China.