Relaxing cannabis laws ‘could lead to more corruption’ in Lebanon 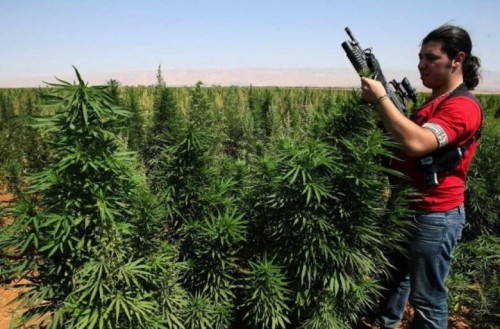 An armed bodyguard inspects a field of Cannabis plants in the village of Knaysseh in the Bekaa Valley in Lebanon on July 30, 2008. (Photo: AFP/Getty Images- Ramzi Haidar)
Share:

Lebanon’s legalisation of cannabis for medical use has been hailed by politicians who have highlighted its potential to shore up the state’s debt-ridden coffers, but locals and specialists warned that it could instead increase corruption and not benefit farmers.

MP Antoine Habchi, who worked on a draft version of the bill, said it was a “major accomplishment” and could provide new work opportunities to poverty-stricken regions of the country.

“The bill, in its final form, has taken into consideration international standards, quality control, anti-monopoly measures, and a dynamic model of public private management,” said Mr Habchi, who sat on a parliamentary committee that studied the legalisation of cannabis for over a year.

Yassine Jaber, a member of parliament who headed the committee, said that the new law “will create a new system that will attract farmers who are growing cannabis illegally”. High-quality cannabis has been illegally grown for over a century in the rich soil of the Bekaa valley, in the east of the country, where labour is cheap.

Though the legalisation of cannabis has been on the table for years, Lebanon began seriously considering it in 2018, when consultancy firm McKinsey & Co confirmed it could benefit Lebanon economically.

Former economy minister Raed Khoury embraced the idea, boasting that cannabis could become a US$1 billion dollar industry. Lebanon has been struggling with its worst financial crisis in history and defaulted for the first time on its foreign debt in early March.

A special regulatory authority working directly under the authority of the prime minister will supervise the distribution of licences to the private sector, although it is expected to take at least a year to set up. Farmers still face prosecution for growing cannabis illegally until then.

A local official from Brital, a town in the Bekaa where significant amounts of cannabis are grown, told The National that he was not convinced by the effectiveness of the new law.

“This project does not meet our aspirations. On the contrary, it helps to corrupt society,” said Mukhtar Ahmad Mohamed Tleiss.

“The problem is that … property owners own unregistered lands,” he said. “These lands have been inherited from our forefathers during the era of the French and the Turks.”

In many remote rural areas of Lebanon, particularly those close to the Syrian border, private property has never been formerly delineated by the state since its independence in 1943.

Though locals have informal ways of marking ownership, it would be difficult for farmers to enter a state supervised system of cannabis production for this reason, argued Mr Tleiss.

The state already has little control on the Bekaa region, he highlighted. “The government disengaged, and everything is in chaos now, especially amid the famine and hunger.”

Though Lebanese security forces used to fight drug cultivation and burn crops, they stopped when security issues spiked with the beginning of the Syrian civil war in 2011. Regaining control after nearly a decade of absence could be difficult, especially as local dealers could offer higher prices than the state, said Mr Tleiss.

Farmers have little trust in the state, which has tried to introduce alternative crops such as sunflowers, cumin and saffron over the past decades, but did not follow up with the necessary infrastructural support or compensations.

“There are no strong state institutions in the Bekaa. Many people are protected [by political parties],” he said.

He warned that legal buyers would try to offer lower prices than those given by drug dealers, encouraging a parallel market. “Private buyers must pay market price to encourage socio-economic development in the Bekaa region,” he said.

Producing cannabis, which does not need much care, is profitable for farmers, who can make between US$10 to $12,000 per hectare per year, according to Mr Makhlouf’s calculations. This is an important sum in the region, where there are few employment opportunities.

Currently, cannabis production injects about $500 million a year into the local economy through traders and farmers, said Mr Makhlouf. Most of the profits – around $2 billion – go to international traffickers.

There is also a more important sticking point: the new law only legalises cannabis that contains less than one per cent of the psychoactive compound tetrahydrocannabinol, or THC.

Lebanese cannabis contains up to 18 per cent THC, meaning that genetically modified plants and seeds would have to be imported to conform to the new standards necessary for medicinal use, said Mr Makhlouf, who opposes the idea.

The risk is that farmers might mix plants because the new variety would look exactly like the old one, argued Mr Makhlouf. “The leaf’s shape, size and smell are exactly the same. We would need hundreds of experts to check that the right type of cannabis is being used, driving costs up,” he said.

Instead of focusing on medicinal and industrial use, the state should export local cannabis to countries that have legalised its recreational consumption in the Americas and Europe and produce oil from the plant for medicinal use.

This could generate billions of dollars for the state each year. If managed well and according to these guidelines, cannabis could become Lebanon’s “green gold,” said Mr Makhlouf.