Maryland governor blasts Trump : ‘Absolutely false’ for him to say states have testing capacity to reopen 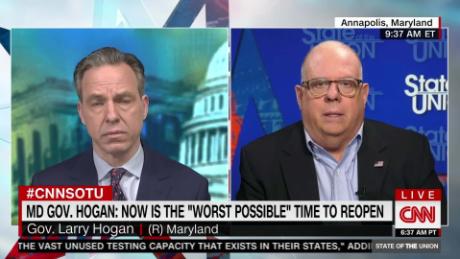 Coronavirus tests imported from South Korea by Maryland Governor Larry Hogan (R) were flawed and ended up not being used. Hogan, a frequent critic of President Donald Trump, trumpeted the arrival of the South Korea tests in April and praised the assistance of his South Korean-born wife in obtaining them. The Washington Post SAUL LOEB AFP/File
Share:

Maryland Gov. Larry Hogan (R) said Sunday that it was “absolutely false” to suggest that the United States’ coronavirus testing capacity is at a level to safely begin reopening portions of the economy, disputing comments made by President Trump just a day earlier.

Speaking on CNN’s “State of the Union,” Hogan said that a shortage of testing kits has continued to be the biggest problems for states as they manage the fallout of the novel coronavirus pandemic. He said that Maryland alone has increased its testing capacity by 5,000 percent in the last month, but that it still has yet to reach a level to comfortably reopen businesses.

“To try to push this off and say the governors have plenty of testing and they should just get to work on testing, that somehow we aren’t doing our job, is just absolutely false,” Hogan, who is also chairman of the National Governors Association, said.

President Trump’s claim that states have enough tests to reopen “is just absolutely false,” says Maryland Gov. Larry Hogan. “It’s not accurate to say there’s plenty of testing out there and the governors should just get it done. That’s just not being straightforward.” #CNNSOTU pic.twitter.com/0K48hRAgzI

“Every governor in America has been pushing and fighting and clawing to get more tests, not only from the federal government, but from every private lab in America, and from all across the world,” he added.

The comments contrast with messages promoted by Trump and Vice President Pence in recent days. Pence said  during a White House briefing on Friday that the U.S. testing capacity had reached a sufficient level to allow states to begin the first phase of reopening once they saw a consistent decline in cases for two weeks.

Trump echoed those remarks on Saturday, saying that the nation’s testing capability and capacity is “fully sufficient to begin opening up the country totally.” Trump also lashed out at those trying to “politicize the issue.”

The U.S. is testing nearly 150,000 people each day on average, a rate that some health experts say is far too low for the nation to relax social-distancing restrictions. Health officials have also said that a more comprehensive contact-tracing program needs to be in place before states begin reopening businesses.

Virginia Gov. Ralph Northam (D) said that it was “delusional” for the Trump administration to say that testing capacity is reaching sufficient levels.