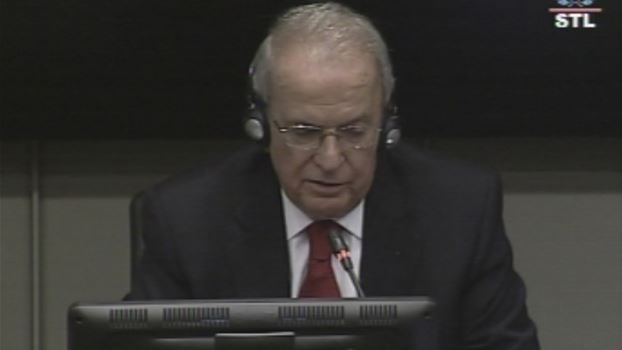 File photo :MP Marwan Hamadeh of the Democratic Gathering bloc is shown testifying at the Special Tribunal for Lebanon in the murder case of former PM Rafik Hariri Nov 18, 2014. Hamadeh miraculously survived an assassination attempt in 2004 . The prime suspect is also Salim Ayash the Hezbollah operative who was indicted in the murder of former PM Rafic Hariri . The families of the victims urged the UN to secure funding for Special Tribunal for Lebanon, after it was reported that STL ran out of funds and was facing serious challenges to its continued operation.
Share:

“Lebanon’s entity is in danger and Rustom Ghazaleh’s clique is seeking to destroy the economic system. This is the clique that (PSP leader) Walid Jumblatt has referred to,” Hamadeh said in remarks to MTV.

Ghazaleh, who died in a hospital in Damascus in April 2015, after he was admitted under mysterious circumstances and after he was reportedly  badly beaten by Syrian security forces was the former Syrian military intelligence officer in Lebanon from December 2002 to April 2005. He succeeded the late Ghazi Kanaan who committed suicide in Syria on October 12, 2005 also under mysterious circumstances . Both were accused of intervening extensively in the country’s political affairs.

“This is not a government; it is barely a municipal council or a security detachment,” Hamadeh said about Diab’s Hezbollah- backed government

“A coup mentality is prevailing and putting national accord in jeopardy,” Hamadeh warned.

“Where are the reforms in electricity, telecommunications, oil and the appointments that have been drafted by the judicial council before being shelved?” Hamadeh added.

PM Diab’s government is backed by the Iranian backed Hezbollah militant group and its allies Speaker Nabih Berri and his Amal party and President Michel Aoun and his FPM party.

Hamadeh , a former Economy Minister survived on Oct 1 2004 a powerful Beirut car bombing, the first in a string of similar attacks targeting anti-Syrian politicians and journalists. Former PM Rafik Hariri was assassinated several months later on February 14 , 2005 . Syria and Hezbollah were accused of being behind Hariri’s assassination . 5 members of Hezbollah are being tried by the UN backed Special Tribunal for Lebanon (STL) over Hariri’s murder .

Hamadeh’s nephew , Gibran Tueni, a prominent anti-Syrian newspaper editor and lawmaker, was killed by a car bomb on Dec. 12, 2005. Syria and Hezbollah were also accused of being behind his assassination