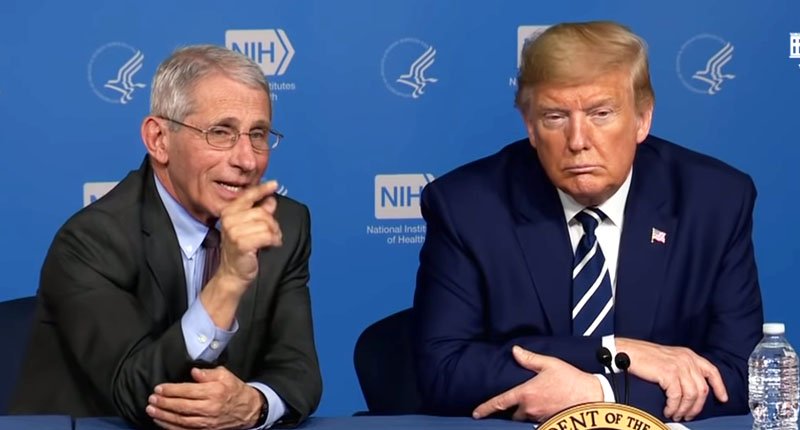 File photo : Dr. Anthony Fauci (L) , the government’s top infectious disease expert, said on April 15 that the U.S. does not yet have the critical testing and tracing procedures needed to begin reopening the country’s economy, adding a dose of caution to increasingly optimistic projections from the White House. “I’ll guarantee you, once you start pulling back there will be infections. It’s how you deal with the infections that’s going count,” Fauci told the AP. The number of Coronavirus cases has been surging ever since the economy was open. Fauci and Trump no longer speaking
Share:

As the coronavirus pandemic sweeps across the U.S., claiming more than 23,600 lives as of Tuesday, the Trump administration has come under fire for disregarding guidance from past administrations on combating a pandemic and for pushing for funding cuts to some core public health programs on which the country now depends.

But the administration has also failed to meet the goals laid out in its own pandemic plan, which was developed in the first year of Trump’s presidency and released in December 2017. That plan, an update and rework of previous’ administrations’ strategies, is focused on preparing for a virulent strain of influenza rather than the novel coronavirus. That means that some flu-specific goals, such as the development of a vaccine in just a few months, can’t be applied to the current crisis. But nearly all of the objectives for preparing for and responding to emerging diseases are applicable — from how to communicate effectively with the public to how to develop, stockpile and distribute enough respirator masks to keep health workers safe.

“It’s a fine plan and hits a lot of the right notes,” said Jeremy Konyndyk, a senior policy fellow at the Center for Global Development who worked on global disaster response under both the Obama and Trump administrations. “The failure was a leadership and execution failure.”

Here are five ways the administration’s handling of the current pandemic fell short of meeting their own targets:

The Trump administration’s plan flagged the importance of the Centers for Disease Control’s International Reagent Resource (IRR) — which supplies public health labs with testing supplies – and set a goal of improving production of reagents used in test kits and distributing kits and supplies to laboratories in the U.S. and around the world.

Shortages and delays have been rampant

A shortage of test kit materials, including reagents, has significantly hampered the Trump administration’s efforts to ramp up testing across the country – one of several U.S. government failures around testing in the early weeks of the pandemic that allowed the virus to proliferate unchecked. Public labs say the IRR has not kept up with the demand for reagents – the chemicals used to prepare samples from patients to test for the virus – leading them to turn to state governments and private companies to scramble to obtain them.

“It’s well known that the testing modalities did not roll out as smoothly as we would have liked and that’s gotten us behind with the entire response,” said Marcus Plescia, the Chief Medical Officer of the Association of State and Territorial Health Officials. “We’ve been running out of reagents and cotton swabs, and we still don’t have testing at an ample enough level. We’re still mainly testing health care workers and people with known contact with a positive case and people with health risks, and we’re basically telling everyone else just to stay at home. That’s sound advice, but it’s not how you contain an infection.”

Currently, there are backlogs of hundreds of thousands of untested samples sitting in labs around the country, and hospitals told HHS’ Inspector General that the delay in getting test results has led to patients suspected of having the virus occupying desperately needed beds.

The plan emphasizes “community mitigation measures” like social distancing, saying they’re especially important when “the most effective countermeasure—a vaccine against the new pandemic virus—might not yet be broadly available.” It sets out several goals to improve public awareness, including the dissemination of “guidance for public health officials on the use of nonpharmaceutical interventions (NPIs) by the general public” and maintaining federal support for state and local public health officials in implementing these measures.

Guidance has been uneven and undermined by the president

President Trump has yet to issue a national stay at home order as coronavirus has spread throughout the country, despite recommendations he do so from some of his top health officials. While the CDC put out guidance on social distancing, states ultimately decided when and how to implement them, creating a patchwork that public health experts say led to the eruption of hot spots in states slow to ban public gatherings.

In the 2017 plan, the administration said it was assuming that any newly emerging virus “will have the ability to spread rapidly worldwide.” That means, Konyndyk and other experts argue, that they should have been communicating to states and the public that major lifestyle changes might be needed as soon as Covid-19 was detected in China.

“That is about the opposite of what they did,” Konyndyk said. “You had the president and senior officials using phrases like ‘the risk is low’ and ‘the situation is under control,’ and the message that sent was that people didn’t need to get ready for anything. That led to a much messier and more inconsistent rollout of community mitigation measures.”

Federal guidance on other nonpharmaceutical interventions has been haphazard as well. The Trump administration for the first several months of the outbreak rejected guidance many other countries had implemented on the use of face masks by the general public. The White House’s coronavirus task force recently reversed itself, recommending that people wear cloth masks in public whether or not they have symptoms — a recommendation President Trump swiftly undermined by saying in a recent press briefing: “You do not have to do it. They suggest it for a period of time, but this is voluntary. I don’t think I’m going to be doing it.”

Government officials would give the public “accurate, consistent and timely” information about the pandemic

The 2017 plan stresses the importance of “accurate, consistent, timely, and actionable communication” from the federal governments that relies on “appropriate channels and spokespeople.”

The administration’s messaging has been all over the place, and political voices have drowned out health experts

The president’s daily press briefings during the coronavirus pandemic have been riddled with contradictory and incorrect information. He has suggested without evidence that the virus would vanish as the weather warmed up, described the virus as no worse than the flu, recommended against the advice of public health experts that people pack churches on Easter, and hyped a drug not yet provento be safe or effective for treating coronavirus.

At the same time, the White House has sidelined some of its top health and science officials, and banned others from testifying to Congress. And while the CDC held regular press calls in the early weeks of the pandemic, the agency has not done so in several months.

“CDC needs to be the public health voice throughout this pandemic,” said Dara Lieberman, director of government relations at the Trust for America’s Health. “The pandemic response has been most effective when the leadership comes from those with the most public health expertise and less effective when politics enters the picture.”

CDC Director Robert Redfield has, however, successfully brought evidence-based messaging about the virus to a generally skeptical audience on local radio and right-wing online outlets, using his bonafides as a prominent religious conservative.

Robust international cooperation, including support for the World Health Organization

The Trump administration’s plan recognizes that no nation is an island when it comes to a pandemic, and encourages “expanded international coordination on pandemic preparedness and response.”

In particular, it recommended “continued support” for the World Health Organization, particularly its Global Influenza Surveillance and Response System, which it calls a vital tool to “detect an emerging pandemic threat, but also to produce timely seasonal and pandemic vaccine candidates.”

President Trump announced on April 14 that he is cutting off U.S. funding to WHO in the middle of the pandemic, while his administration conducts a review of the international group’s record of “severely mismanaging and covering up the spread of the coronavirus.” Echoing criticisms aired by GOP lawmakers and conservative pundits, Trump is accusing the international health body of have a pro-China bias and of wrongly advising against travel bans in the early months of the pandemic. His aides have also pushed for the creation of an alternative institution.

The U.S. contributes the biggest share of WHO’s 194 member states to its $4.8 billion annual budget, and cutting off that funding is likely to be a major blow to the organization as it conducts vaccine trials, distributes test kits and advises governments on public health around the world.

Faster production and distribution of protective masks, including reusable ones

The Trump administration predicted in 2017 that a massive amount of masks and other protective gear would be needed in the event of a flu outbreak or other pandemic, and recommended both “developing technology and processes that allow for rapid production of N95 respirators” and developing and testing “effective reusable respirators that will reduce the burden to produce and dispense large volumes of disposable respirators during an outbreak.”

Widespread and dangerous shortages of masks for health care workers.

While Trump administration health officials have focused on supply chain issues over the last couple years, their slow and uneven acquisition and distribution of N95 respirators and other personal protective gear has severely impacted the medical providers on the front lines of coronavirus crisis — some of whom have fallen ill and lost their lives caring for infected patients. Many of the hundreds of hospital administrators surveyed by the HHS’ inspector general for a report in late March said their doctors and nurses are still rationing and reusing masks that are supposed to be discarded, and that shipments of masks from the federal government have been inadequate and have sometimes contained expired and rotted materials. First responders and nursing home caretakers have struggled to obtain masks as well, put them at risk of contracting the virus and passing it on to the vulnerable people with whom they interact. “Maybe nobody had really thought through a scenario where everyone in the world is pulling at supplies and snapping them up as soon as they’re manufactured,” Plescia said. “Maybe had that been anticipated, we would have stockpiled more materials. And if we had moved toward reusable masks, we’d be in a much better place.” Instead of developing reusable respirators as the plan recommended – CDC created guidance and approved technologies for the sanitizing and reusing disposable masks. And the Association of Equipment Manufacturers told POLITICO on April 9 that the government has been slow to approve new respirator masks designs its members have submitted.

“Without this certification, it will significantly limit the ability to deploy these masks to medical professionals and first responders,” said Kip Eideberg, the group’s senior vice president for government and industry relations.