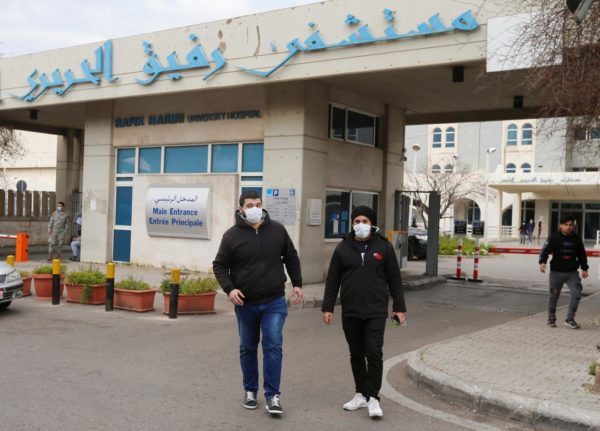 Rafik Hariri hospital where most of the COVID19 cases being treated
Share:

Lebanese expats are pushing up the number of coronavirus cases in the country, after nationals returning from London and one from Doha were found to be infected.
The number of people in Lebanon with the disease has exceeded 600, after 14 new cases were recorded among expats coming back from overseas and 13 among locals.
The Ministry of Health said Friday that the number of COVID-19 cases in Lebanon had reached 619 and that the death toll was 20 following one further death.
Of the 14 infected expats, 13 were traveling from London and one was coming from Doha. Five passengers for the London flight were prevented from boarding because they tested positive. The plane returning from Doha carried 122 passengers, including a child.
There were no reported cases on the rescue flights from Accra or Frankfurt.
No measures were taken to stop the flights carrying the expats or stranded students, especially those coming from countries where the pandemic is spreading.

Middle East Airlines will operate more rescue flights on Monday. These will carry Lebanese expats from London, Paris, Jeddah and Libreville.
Lebanon has an official holiday until Monday evening, and the push to enforce curfews and quarantines have become tougher as the Easter weekend gets underway.
Streets in Lebanon’s main cities are nearly empty, except for some people wearing masks wandering around and birds fluttering with confidence on the roads.
Municipal vehicles carrying speakers are broadcasting Good Friday mass because churches have closed their doors to the public and attendance is restricted to clergy. Televised sermons have urged people “not to lose hope or become weak during the difficult times we are going through.”
The country is also grappling with a surge in coronavirus-related crimes, such as theft from pharmacies and the manufacture of fake cleaning and sterilization supplies.
A customs patrol unit was ambushed on Thursday while taking a truck loaded with forged disinfectant into custody in the Dora area, east of Beirut. There was a shootout between the patrol and the gang targeting the unit, with one gang member injured.

Others have exploited the lockdown and pressure on security forces by trying to smuggle out drugs.
The Directorate General of Internal Security Forces said a plan had been foiled to smuggle a large quantity of cannabis to an African country. It was the largest drug smuggling attempt in the history of Lebanon and it was ready to be “traded, promoted, sold and smuggled abroad,” the directorate added.
“A fortnight ago a convoy of eight trucks that was heading toward the Port of Beirut was seized. The trucks carried thousands of nylon bags containing agricultural soil. Twenty-five tons of cannabis were seized while inspecting the containers in the port. They were packed into bags, and placed professionally under the agricultural soil in order to hide the drugs.”
The bags were labeled “Ah ya Hanane,” “Al Jazeera New 2019,” “Al Ostoura New 2019,” “The Free Bird,” “The Joker,” “Beirut Mood,” “Al-Sham Mood,” “Premium Cruiser,” “Primrose,” and “Kiki Do You Love Me.”