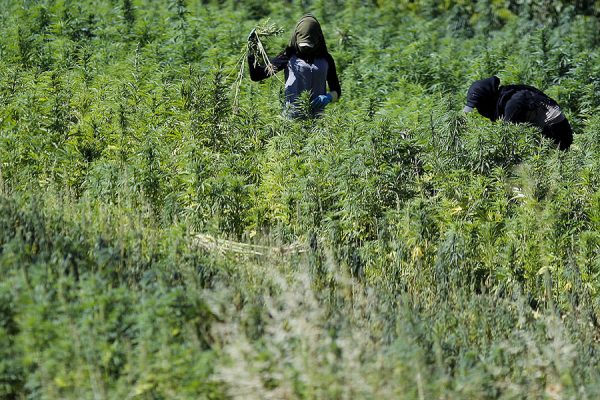 Change is coming to the Bekaa Valley and elsewhere in Lebanon , after the Lebanese parliament approved cannabis for medical use based on the advice of McKinsey & Co., a prominent global consulting firm
Share:

Lebanon’s security forces said Friday they had made their largest cannabis seizure in history last month, unearthing 25 tonnes of the drug intended for Africa.

The Mediterranean country on March 15 announced a lockdown to stop the spread of COVID-19, which has now officially infected 609 and killed 20 nationwide.

After inspection, “huge quantities of hashish reaching around 25 tonnes were seized… that had been professionally hidden inside bags of soil,” it said in a statement.

“This quantity is the largest seized in the history of Lebanon,” it added, and had been intended for “an African country”.

The marijuana came in a variety of kinds including “Beirut mood”, “Spring flower”, or even “Kiki do you love me”, the ISF said.

Consuming, growing and selling marijuana is illegal in Lebanon, but in the marginalised east of the country its production blossomed during the 1975-1990 civil war.

Authorities have since struggled to clamp down on the trade and its production has turned into a multi-million-dollar business.

In 2016, the United Nations Office on Drugs and Crime ranked Lebanon as the third main source of cannabis resin after Morocco and Afghanistan, which are both much larger.

But growers have fought back, protesting over a lack of alternatives for their livelihoods. In 2012, they fired rockets at army bulldozers trying to raze their crop.

Legalising the drug for medical purposes

Lebanon’s parliament is set to vote on a law that would legalise the cultivation of cannabis for medical and industrial use in an effort to boost its crippled economy and curb illicit production of the psychoactive plant.

The draft law, which has been endorsed by parliamentary committees and is now headed for a final vote, would only affect cannabis that contains less than one percent of the psychoactive compound tetrahydrocannabidinol, or THC.

THC gives cannabis the recreational effects that have made it the most widely used illicit substance across the globe. The World Health Organization (WHO) estimates that around 147 million people, or 2.5 percent of the world population, consume cannabis.

Lebanon has cultivated the plant for at least 100 years and produces large amounts of hashish, a sticky, sweet-smelling derivative of the cannabis plant that looks like chocolate. Though illegal to produce, sell or use, it is widely available locally and is also illegally exported.

Lebanese hashish can be found in European capitals, and formerly made up about 80 percent of the world’s supply during the country’s civil war years (1975-90) when cultivation was at its peak.

Instead of dealing with that market, this bill would seek to create a new one involving types of cannabis plants that have not traditionally been cultivated in Lebanon.

Member of parliament Yassine Jaber, who headed the subcommittee that drafted the law, said the bill was based on a 2019 report by United States-based consultancy McKinsey & Company that recommended Lebanon legalise cannabis production for “high-added-value medicinal products with export focus”.

Shortly afterwards, then-economy minister Raed Khoury said a legal cannabis sector in Lebanon could generate $1bn in revenue per year because the quality of Lebanon’s hashish was “one of the best in the world”.

“We have a competitive and a comparative advantage in the cannabis business,” Jaber told Al Jazeera. “Our soil is among the best in the world for this, and the cost of production is low compared to other states.”