Cuomo ‘not confident’ in federal govt’s handling of coronavirus crisis 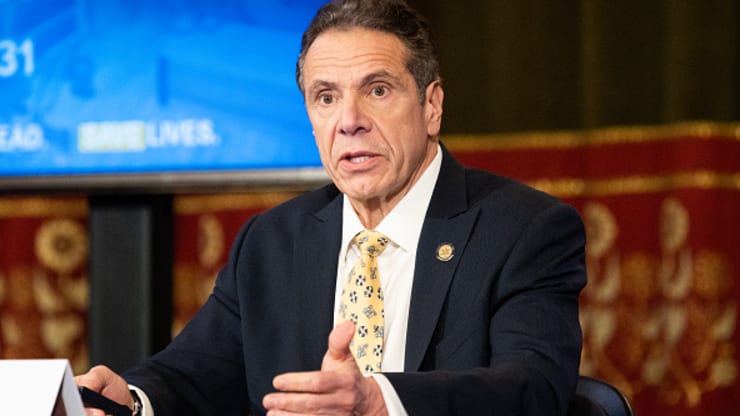 “How confident am I of federal responsibility and action? Not that confident,” Cuomo said as he left a daily press briefing in Albany on the virus.

Cuomo’s criticism came after he announced that COVID-19 deaths in New York reached a daily record for the third straight day with 799 fatalities, and after he said that the $2 trillion federal relief bill does even less for his state than he thought.

He compared the economic and humanitarian crisis in New York to the Sept. 11, 2001, terrorist attacks on the city, which felled the twin towers of the World Trade Center and killed nearly 3,000 people.

“9/11 was so devastating, so tragic, and then in many ways we lose so many New Yorkers to this silent killer,” Cuomo said, “that just ripples through society with the same randomness, the same evil that we saw on 9/11.”

The Democratic governor has worked closely with President Donald Trump and other federal officials in an all-hands effort to contain the spread of the virus, which has hit New York much harder than any other state in the U.S.

There are more than 151,000 confirmed cases across the state and 81,800 in New York City alone — almost as many as China, according to data compiled by Johns Hopkins University.

Cuomo and Trump, who said he wants governors to be “appreciative” of his efforts, have largely stayed on good terms as they navigate the crisis.

But earlier in the conference, Cuomo once again slammed the so-called Phase 3 coronavirus relief package that passed Congress with bipartisan support and was signed by Trump late last month.

That $2 trillion legislation – the largest aid package in U.S. history – meted out just $1.3 billion to the Empire State, Cuomo said.

New York had expected to receive between $5 billion and $6 billion in federal relief – an amount that Cuomo had already called inadequate before it even passed Congress.

“When we did our state budget a couple of weeks ago, we believed what they said and we thought we were looking at $6 billion in health-care funding,” Cuomo said at the presser Thursday.

“Turns out, when we actually read the language, it was about $1.3 billion to the state of New York, which is much different than $5 [billion] or $6 billion. And the funding disqualified one-third of New York Medicaid recipients, which nobody said,” the governor said.

“We need the federal government to be responsible” and “pass legislation that helps,” he added.

The White House did not immediately respond to CNBC’s request for comment on Cuomo’s remarks.

After the funding bill passed the Senate in late March, Cuomo decried it as “irresponsible” and “reckless.” He said at that time that the $5 billion New York would receive from the bill doesn’t come close to covering the state’s projected revenue shortfall, which could total $15 billion.