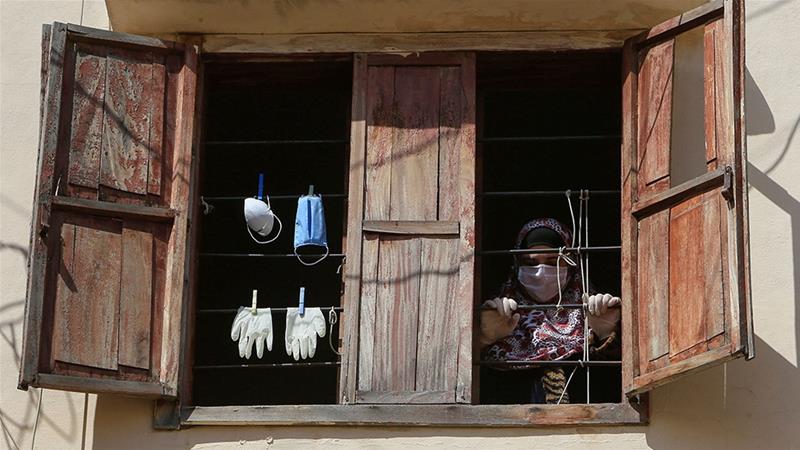 Gloves and face masks are hung up to dry during a countrywide lockdown to combat the spread of the coronavirus disease (COVID-19) in Sidon, Lebanon [Ali Hashisho/Reuters]
Share:

Beirut, Lebanon – Lebanon’s Social Affairs Ministry announced on Wednesday it is launching an aid programme for those most in need as the country’s worst economic crisis in a generation is exacerbated by a nationwide lockdown to stem the spread of coronavirus.

In its first phase, the 75 billion Lebanese pound programme aims to provide one-time cash assistance of 400,000 Lebanese pounds ($140 at current parallel market exchange rates) to about 187,500 families, according to Jad Haidar, an adviser to Social Affairs Minister Ramzi Moucharafieh.

The aid will be distributed to roughly 150,000 families already registered with the country’s National Poverty Targeting Program, as well as 37,500 families that include front line healthcare workers and taxi and bus drivers who have been forced off the job by the lockdown, Haidar said.

The programme is launching as Human Rights Watch (HRW) warns that millions of Lebanon’s residents could go hungry unless the government establishes a well-coordinated and robust assistance plan.

“If the government does not step in, more than half the population may not be able to afford food and basic necessities,” Lena Simet, senior researcher on poverty and inequality at HRW said in a statement.

Assuming an average family consists of five people, Haidar said the programme would benefit roughly a million people in the country, adding that a number of independent initiatives are helping families across the country. But he acknowledged that more government aid would be needed.

Moucharafieh also cautioned that not all those who apply for aid would receive it.

“In all honesty the state does not have [financial] capacity to get aid to all the people who apply, so it will be in several phases,” he said in a televised news conference on Wednesday.

According to recent figures from Lebanon’s Ministry of Finance, about 45 percent of Lebanese now live below the poverty line, with 22 percent of the population living in extreme poverty.

Inflation is expected to soar from 2.9 percent in 2019 to above 27 percent this year, as the coronavirus crisis heaps even more pain on the country’s already ravaged economy.

A decades-long economic slump coupled with a significant debt burden and unsustainable financial policies has led to a dollar shortage in Lebanon. The currency, pegged to the US dollar since 1997 at 1,500 to $1, has devalued by nearly 50 percent on the parallel market since last summer.

Thousands of workers had already lost their jobs or had hours cut and wages slashed when the government announced a national coronavirus lockdown on March 15. Restaurants, bars and non-essential shops have been ordered closed.

The measures were further tightened on March 26 when an overnight curfew was announced.

Sporadic protests have broken out in parts of the country as people break the mandatory curfew to ask for assistance. “We want to eat, we want to live,” protesters chanted in Beirut’s southern suburbs late last month.

But many have praised the government’s swift action to control the spread of COVID-19. As of Wednesday, the country had 19 coronavirus-related deaths and 575 confirmed cases, according to Johns Hopkins University.

A number of analysts have raised concerns about how even the meagre government aid that has been pledged will be distributed, given that Lebanon regularly ranks among the most corrupt countries in the world.

Lebanon’s sectarian elite have long dolled-out state funds to their respective supporting communities across the country in order to create networks of loyalty and dependence.

Social Affairs Minister Moucharafieh said cash aid would be distributed with the help of Lebanon’s army, the country’s most respected institution that is seen to be somewhat isolated from sectarian power-struggles that have paralyzed many of the country’s institutions.

He said citizens would be asked to call local authorities, such as their municipality, who in turn will fill in an online form with about two-dozen questions to assess the family’s needs. The form is then transferred to the interior ministry and on to the army.

The military will then distribute aid directly to those in need, rather than passing it through local authorities, Moucharafieh said, adding that anyone who experiences issues during the process should call a complaints hotline. He urged those filling the forms to work transparently or face prosecution.

Lebanon was rocked by massive anti-establishment protests starting last October that challenged the country’s elites and called for accountability over deeply entrenched corruption. But analysts have warned the current crisis presents an opportunity for political parties to strengthen allegiance and reward loyalty.

Many have mobilised health workers and funds and have distributed food aid. Some have even handed out party-branded protective equipment to supporters and have disinfected streets while playing partisan songs.

“I would warn of the dangers of such an approach because if the state doesn’t establish … who is vulnerable and provide safety nets to people, we’re going to see riots and protests. People will be unable to resort to confinement,” she said.