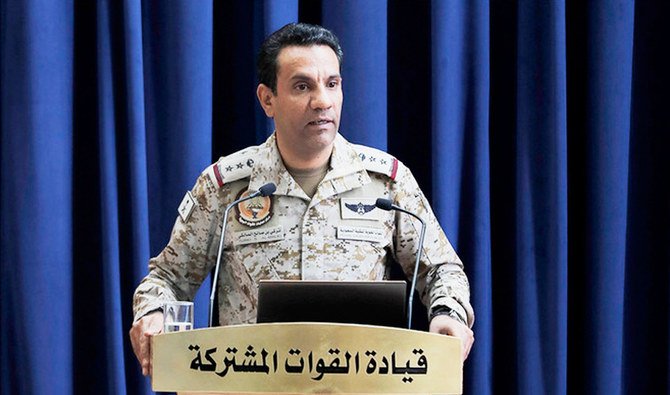 AL-MUKALLA: The Saudi-led coalition has accused Iranian-backed Houthi militia in Yemen of forcing hundreds of African migrants to storm the Kingdom’s southern borders.
Col. Turki Al-Maliki told Al Arabiya TV that videos circulating on social media showing armed Houthis firing live bullets at African migrants in the northern Yemini province of Saada, proved that the militia was trying to undermine Saudi border security while attempting to provoke condemnation of the Kingdom from international rights organizations.
“The video showed the militia intentionally forced those migrants into heading into the Kingdom,” he said, adding that the Houthis also wanted to fuel Saudi public fears over the spread of the coronavirus disease (COVID-19) into the country.
“In all cases, we deal with those infiltrators or migrants according to the humanitarian principles and regulations in the Kingdom,” Al-Maliki said.
The internationally recognized government in Yemen has recently come under heavy public pressure to stem the flow of thousands of migrants into the country from the Horn of Africa region, due to concerns about the COVID-19 pandemic.
A senior government official in Aden told Arab News that the Yemeni government was unable to effectively tackle the situation because its coastguard authority was understaffed.
“This is a big problem that we cannot handle on our own. We suggested to the UN organizations to collect the African migrants from the shores and send them to Kharaz refugee camp in Lahj. We cannot do anything to stop them from coming to Yemen,” the official added.
Yemen’s coastguard authority crumbled at the beginning of Houthi military expansion in early 2015, leaving the country’s long Red Sea and Arabian Sea coastline vulnerable to smuggling operations.
The Saudi-led coalition has trained hundreds of Yemeni coastguards and provided them with fast boats to patrol the coastal area between Hadramout and Mahra.
Despite the war in Yemen that has claimed tens of thousands of lives, African migrants continue to use the country as a transit point before reaching Saudi Arabia, their final destination.
The International Organization for Migration (IOM) estimated that up to 10,000 African migrants arrived in Yemen in February and it expects the numbers to be similar for March.
The organization’s medical teams that operate around Yemen’s southern coasts to treat African migrants have so far not reported any cases of COVID-19.
“Most of them are suffering from exhaustion, hunger and problems in their joints due to walking,” an IOM doctor in Yemen told Arab News.