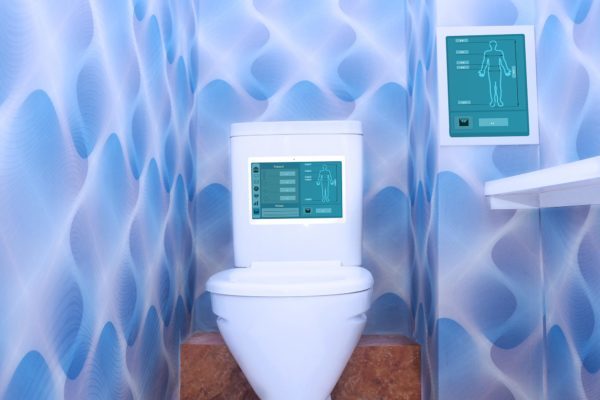 There’s a new disease-detecting technology in the lab of Sanjiv “Sam” Gambhir, MD PhD, and its No. 1 source of data is number one. And number two.

It’s a smart toilet. But not the kind that lifts its own lid in preparation for use; this toilet is fitted with technology that can detect a range of disease markers in stool and urine, including those of some cancers, such as colorectal or urologic cancers. The device could be particularly appealing to individuals who are genetically predisposed to certain conditions, such as irritable bowel syndrome, prostate cancer or kidney failure, and want to keep on top of their health.

“Our concept dates back well over 15 years,” said Gambhir, professor and chair of radiology. “When I’d bring it up, people would sort of laugh because it seemed like an interesting idea, but also a bit odd.” With a pilot study of 21 participants now completed, Gambhir and his team have made their vision of a precision health-focused smart toilet a reality.

Gambhir’s toilet is an ordinary toilet outfitted with gadgets inside the bowl. These tools, a suite of different technologies, use motion sensing to deploy a mixture of tests that assess the health of any deposits. Urine samples undergo physical and molecular analysis; stool assessment is based on physical characteristics.

The toilet automatically sends data extracted from any sample to a secure, cloud-based system for safekeeping. In the future, Gambhir said, the system could be integrated into any health care provider’s record-keeping system for quick and easy access.

The toilet falls into a category of technology known as continuous health monitoring, which encompasses wearables like smartwatches. “The thing about a smart toilet, though, is that unlike wearables, you can’t take it off,” Gambhir said. “Everyone uses the bathroom — there’s really no avoiding it — and that enhances its value as a disease-detecting device.”

Although the idea may take some getting used to, Gambhir, who holds the Virginia and D.K. Ludwig Professorship for Clinical Investigation in Cancer Research, envisions the smart toilet as part of the average home bathroom. In facilitating that broad adaption, Gambhir designed the “smart” aspect as an add-on — a piece of technology that’s readily integrated into any old porcelain bowl. “It’s sort of like buying a bidet add-on that can be mounted right into your existing toilet,” he said. “And like a bidet, it has little extensions that carry out different purposes.”

These extensions sport an array of health-monitoring technologies that look for signs of disease. Both urine and stool samples are captured on video and are then processed by a set of algorithms that can distinguish normal “urodynamics” (flow rate, stream time and total volume, among other parameters) and stool consistencies from those that are unhealthy.

Alongside physical stream analysis, the toilet also deploys urinalysis strips, or “dipstick tests,” to measure certain molecular features. White blood cell count, consistent blood contamination, certain levels of proteins and more can point to a spectrum of diseases, from infection to bladder cancer to kidney failure. In its current stage of development, Gambhir said, the toilet can measure 10 different biomarkers.

It’s still early days, though, with a total of 21 participants having tested the toilet over the course of several months. To get a better feel for “user acceptance” more broadly, the team surveyed 300 prospective smart-toilet users. About 37% said they were “somewhat comfortable” with the idea, and 15% said they were “very comfortable” with the idea of baring it all in the name of precision health.

One of the most important aspects of the smart toilet may well be one of the most surprising — and perhaps unnerving: It has a built-in identification system. “The whole point is to provide precise, individualized health feedback, so we needed to make sure the toilet could discern between users,” Gambhir said. “To do so, we made a flush lever that reads fingerprints.” The team realized, however, that fingerprints aren’t quite foolproof. What if one person uses the toilet, but someone else flushes it? Or what if the toilet is of the auto-flush variety?

They added a small scanner that images a rather camera-shy part of the body. You might call it the polar opposite of facial recognition. In other words, to fully reap the benefits of the smart toilet, users must make their peace with a camera that scans their anus.

By no means is this toilet a replacement for a doctor, or even a diagnosis, Gambhir said. In fact, in many cases, the toilet won’t ever report data to the individual user. In an ideal scenario, should something questionable arise — like blood in the urine — an app fitted with privacy protection would send an alert to the user’s health care team, allowing professionals to determine the next steps for a proper diagnosis. The data would be stored in a secure, cloud-based system. Data protection, both in terms of identification and sample analyses, is a crucial piece of this research, Gambhir said. “We have taken rigorous steps to ensure that all the information is de-identified when it’s sent to the cloud and that the information — when sent to health care providers — is protected under HIPAA,” he said, referring to the Health Insurance Portability and Accountability Act, which restricts the disclosure of health care records.

As Gambhir and his team continue to develop the smart toilet, they’re focusing on a few things: increasing the number of participants, integrating molecular features into stool analysis and refining the technologies that are already working. They’re even individualizing the tests deployed by the toilet. For example, someone with diabetes may need his or her urine monitored for glucose, whereas someone else who is predisposed to bladder or kidney cancer might want the toilet to monitor for blood.

Gambhir’s other goal is to further develop molecular analysis for stool samples. “That’s a bit trickier, but we’re working toward it,” Gambhir said. “The smart toilet is the perfect way to harness a source of data that’s typically ignored — and the user doesn’t have to do anything differently.”