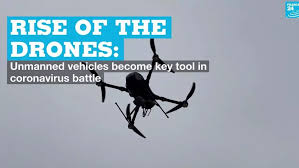 Around the world, authorities are turning to drones in the battle against the coronavirus pandemic, using them to enforce lockdowns and disinfect urban areas.

With dozens of cities in lockdown, the technology has become an important tool in keeping people off the streets.

The trend began in China in the early weeks of the outbreak and has since gone global, with drones fitted with loudspeakers used to remind the public of lockdown measures and admonish rule-breakers.

Meanwhile, in France police have been testing surveillance drones to identify those who have broken the country’s confinement laws.

“A drone is not going to replace a police officer. That goes without saying but it’s part of the information gathering,” said Didier Lallement, Paris Police Prefect.

“Sometimes they are attacked by birds, which take them for rivals, but rarely by people walking around.”

But some countries, including India and Indonesia, have found uses for the drones beyond law enforcement by using them to spray crowded urban areas with disinfectant.