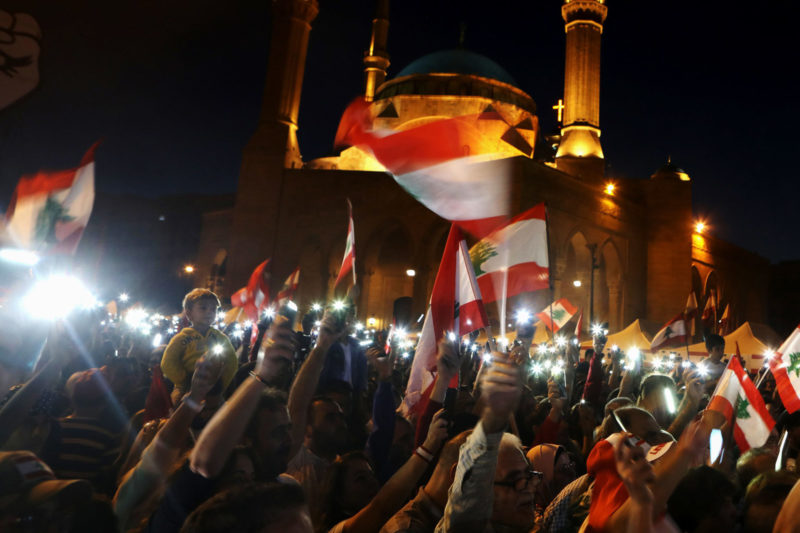 Lebanese anti-government protesters use the light on their mobile phones during a demonstration in downtown Beirut in November. Activists turned to social media platforms to get out their message, streaming protests live on Twitter and highlighting police abuse on Instagram. New podcasts documenting corruption launched with the protest movement. Patrick Baz/AFP via Getty Images
Share:

In Lebanon, cyberspace is the new battle ground between protesters and the security services that have increased measures to curb dissent, intimidating and arresting government critics for online speech.

Since October, Lebanese citizens have gathered to protest around the country, uniting across party and sectarian lines against an entrenched political oligarchy that protesters say has made fortunes mostly from government funds at the expense of the country.

The massive outpouring was sparked by a proposed tax on calls made through Internet services such as WhatsApp. The government abandoned the tax after protesters paralyzed the country, forcing banks and schools to close. Now, the authorities use WhatsApp to identify protest leaders and arrest them, activists and lawyers say.

In the first months of civil disobedience, Lebanon’s mainstream media outlets — largely owned by the state, political parties or politicians — downplayed the unrest, ignored it or suggested the protests were exploited by regional and international enemies.

Activists turned to social media platforms to get out their message. They organized and shared updates on WhatsApp, streamed protests live on Twitter and highlighted police abuse on Instagram. New podcasts documenting corruption also launched with the protest movement.

Many Lebanese use WhatsApp, a Facebook-owned cellphone app that allows users to send each other encrypted text and voice messages as well as make calls for free, in a country where ordinary phone calls are expensive. Many demonstrators have used WhatsApp chat groups to criticize the government, call protesters to the streets and share videos of arrests and injuries from rubber bullets.

Mohamad Najem, executive director of the Social Media Exchange, a Beirut-based digital rights group, says there is a “different kind of cat-and-mouse” game. “Social media is being used as a tool to identify protesters and to know who they are and their networks and all that,” he says.

Lebanon’s print media, its newspapers and magazines, are protected by laws that are the envy of the Arab world, but comments posted to social media have little protection, says Najem.

“The law is bad, it’s a lot of gray area. It really depends on the mood of the general prosecutor, what he’s doing, what kind of whiskey he is drinking at night, who is talking to him,” he says. “All these issues are really how the decisions processes are made in this country.”

In December, the authorities in Beirut summoned filmmaker and activist Rabih El-Amine for criticizing the policies of a local bank on the Internet. He says officials questioned him for hours over 25 Facebook posts, which they said contained “insults.”

“They asked me to delete them or edit them,” says El-Amine. The officials also demanded he sign a pledge not to insult the bank again as a condition of his release. He complied.

But later, he says, he was followed and challenged by an unknown man when he took part in a sit-in in front of the parliament building. “A guy approaches me and asks me if I am Rabih El-Amine, and I said yes. He attacked me and broke my nose,” he says.

El-Amine has since fled to Europe, where NPR reached him via WhatsApp.

“We know who you are”

The Cybercrimes Bureau took on more and more cases after mass protests erupted in 2015 over uncollected trash in Beirut. Between January 2015 and May 2019, the bureau opened 3,599 investigations relating to defamation, libel and slander, according to a Human Rights Watch report published last November. “That number was very concerning,” says Majzoub, the report’s author.

The measures to suppress critics have ramped up again as the latest protest movement persists and Lebanon’s economic crisis worsens.

Lebanese authorities have adopted new tactics, including infiltrating WhatsApp chat groups to identify protest organizers and arrest them, say lawyers who are handling the cases.

“The government is using social media to track protesters and leaders. They send their ‘guys’ to contribute to the WhatsApp groups to see who is talking,” says Khaled Merheb, a lawyer based in the Lebanese city of Tripoli and with an office in the capital Beirut.

One protest organizer describes to NPR how the infiltration happened to her. She doesn’t want her named used because she fears arrest. She believes government agents joined the group anonymously to monitor who is saying what, and then sent rapid-fire, seemingly nonsensical images and messages to disrupt and disperse the group.

“It’s a scare tactic to tell people, ‘We know who you are and what you are doing and we will stop you,’ ” the protest organizer says.

She says the fear comes from an invasion of an encrypted message service that contains cellphone numbers and anti-government comments that can be used by the security police to identify protest leaders.

“They find who that person is and they go and arrest them on the basis that they were anti- the ruling power,” she says.

Since January, when a new cabinet was named after Prime Minister Saad Hariri and his government resigned under pressure from protesters, the crackdown appears to have resumed. The Cybercrimes Bureau has summoned at least 60 activists for interrogation so far this year, according to lawyers working on the cases. The attorneys say the unit has been targeting protest leaders, arresting them at home rather than on the demonstration front lines.

The government do not publicly discuss the widening dragnet.

But a former official who was in charge of domestic security matters is now critical of the new government’s approach.

“We have the names of every single person, at least the leaders, but we did not bring anybody in,” former Interior Minister Raya El Hassan tells NPR. “But now, [the authorities] have taken a different tactic. They are bringing them in even without protesting.”

El Hassan says the tactic comes from the new government backed by Hezbollah and its allies. The militant group, supported by Iran, is playing a more powerful role in Lebanese politics and that has raised concerns about the country’s ability to address an impending economic collapse, she says.

A committee of lawyers set up a hotline to help those detained, beaten by Lebanese security forces or threatened by police who demand cellphone passwords, says Merheb, who mobilizes lawyers in Tripoli to head to police stations after sweeping arrests.

“Never, ever open your phone; it’s illegal, we can sue them,” is his emphatic advice. He explains the latest tactic is a government trying to adapt, surprised and exhausted in the early days of the protests.

“I think the political system is a bit scared,” Merheb says in a café in Tripoli. “At first, they tried to use force, the numbers of the protesters increased. I think they are doing their math.”

He says he is a member of a group called “Lawyers of the Revolution,” set up by the Tripoli Bar Association, that takes on cases pro-bono. They are part of a unique legal movement that is mounting a challenge to the political power in the country.

On Feb. 24, a blogger, a TV reporter and an activist were summoned by the criminal investigations department on accusations of “spreading fake news” about a local political party and “inciting sectarianism and racism.”

Melhem Khalaf, head of the Beirut Bar Association, raced to the jail where they were held to mount a defense. He got them released within hours.

Khalaf, a social activist, was elected in November in a move widely claimed as a victory by protesters because it was the first time an independent candidate was named to lead the country’s top law association without the backing of a political party.

He has assembled a squad of more than 700 volunteer lawyers who visit prisons across Lebanon and report abuses. He turns his office into a legal clinic one day a week.

“It is our mission,” Khalaf says. “I think we have to give hope to our youth. I think we have to build through facts not in words,” explaining an exceptional strategy in the country where leaders are accused of bending the law for their benefit.

He huddles with everyone waiting in a long line at the legal clinic, often into the night, offering legal advice and assigning lawyers.

Times are tough as the Lebanese economy melts down and anger continues to drive protesters on to the streets — and online.

“I think the politicians and established political parties are finding it very hard to adjust to this new Lebanon,” says Majzoub, “where they don’t own the country.”