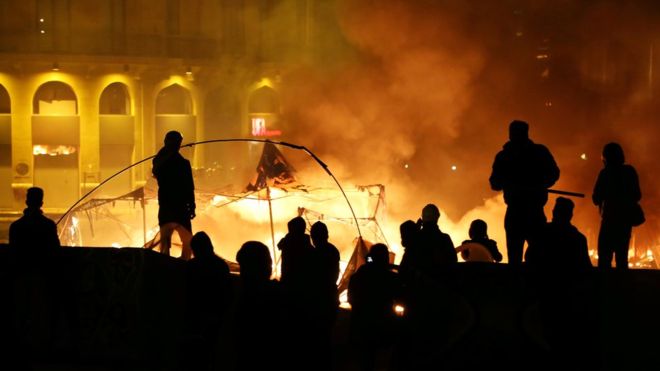 Riot police officers stand behind riot shields amid a cloud of tear gas during protests against the economic crisis outside a Bank of Beirut office in Beirut, Lebanon January 14, 2020. (Reuters)
Share:

BEIRUT, March 5 — Over 500 travel agencies in Lebanon are facing the risk of shutting down due to banks’ restrictions and the economic slowdown in the country.

“Travel agencies’ operations dropped by over 50 percent, prompting many of them to lay off some of their employees while giving others half of their salaries,” Jean Abboud, president of the syndicate of travel agencies owners, told Xinhua.

“We reached a consensus with airline companies which will allow us for three months to act as the only party allowed to release tickets for customers, for us to be able to sustain our businesses. We gained back some of our customers but the activity is still low due to the economic situation,” Abboud explained.

The shortage in U.S. currency in the Lebanese market led to an increase in its price, forcing businesses to adopt new exchange rate as they are incapable of withdrawing dollars from banks accounts and they have to resort to money exchange companies with a higher rate, in order to make dollars transfers to the suppliers outside Lebanon.

The central bank of Lebanon issued a circular earlier this year allowing businesses to transfer only fresh money deposited in their banks accounts, but money that was already available in their accounts before Oct. 17 of last year cannot be transferred.

Marwan Malaeb, administrative and finance manager at Tania Travel, one of the biggest travel agencies in Lebanon, said that travel agencies are also facing the risk of the International Air Transport Association (IATA) halting its operations in Lebanon.

IATA’s main duty is to collect money from travel agencies around the world to pay them to airline companies.

The association has very strict restrictions that if it does not get paid every 15 days by travel agencies, it will stop them from releasing tickets.

Malaeb explained that IATA has a bank account in Citibank in Lebanon and all travel agencies transfer money to this bank account and then the Citibank transfers IATA’s money to its accounts outside Lebanon.

“Until two weeks ago, the central bank was still covering IATA transfers from Citibank in Lebanon to other countries. But the central bank today does not have the capacity to cover big amounts,” he said.

Malaeb noted that some small airlines have already stopped dealing with Lebanon when they noticed the increasing risk of money transfers from the country to foreign countries.

“If the situation remains the same, we won’t have access, as an IATA agent, to release tickets but we can only make reservations. So we would only be dealing with the Middle East Airlines, the national carrier, which would be able then to take advantage of the situation and increase its prices,” he said.

Malaeb also noted that a lot of companies may not send their planes to Lebanon in the future if the central bank fails to cover IATA’s account.