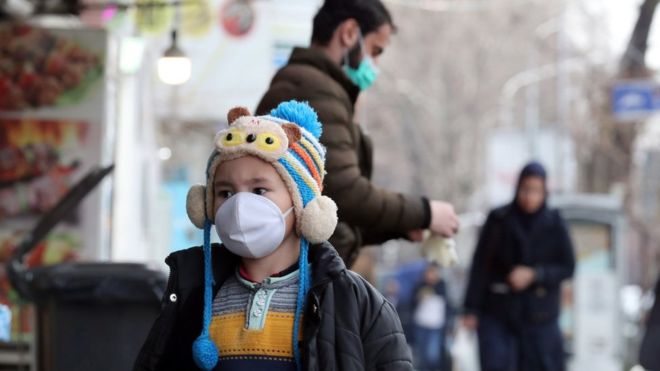 At least 210 people in Iran have died as a result of the new coronavirus disease, sources in the country’s health system have told BBC Persian.

Most of the victims are from the capital, Tehran, and the city of Qom, where cases of Covid-19 first emerged.

The figure is nearly 5 times higher than the official death toll of 43 given by the health ministry earlier on Friday.

Ministry spokesman Kianoush Jahanpour insisted it was being transparent and accused the BBC of spreading lies.

It comes after a member of parliament for Qom accused the authorities of a cover-up and the US expressed concern that they may not be sharing information.

“We have made offers to the Islamic Republic of Iran to help,” US Secretary of State Mike Pompeo told a congressional committee in Washington on Friday.

“Their healthcare infrastructure is not robust and, to date, their willingness to share information about what’s really going on inside… Iran has not been robust.”

“The claim to help Iran confront coronavirus by a country that has imposed expansive pressures on the Iranian nation through its economic terrorism and has even blocked the way for purchase of medical equipment and medicines is ridiculous and a political-psychological game,” he said.

Growing lack of confidence in authorities

There are fears in Iran that the government, unsure of how to handle the outbreak, is covering up the extent of the spread of the new coronavirus disease.

Now, a tally of figures reported by BBC Persian’s sources in several hospitals suggests at least 210 people had died across the country as of Thursday night.

The highest number of deaths were said to be in Tehran, where a disproportionately high number of officials have reportedly tested positive for Covid-19, including a vice-president, a deputy minister, and at least two MPs.

Friday prayers in Tehran and 22 other cities were cancelled, and schools and universities closed.

Thousands of Iranians have also been stranded inside and outside the country as many flights have been stopped to and from Iran.

There have been more than 85,000 reported cases of Covid-19 worldwide and 2,900 deaths since the disease emerged late last year – the vast majority in China.

At midday on Friday, the Iranian health ministry reported eight new deaths related to Covid-19, increasing the official toll to 43

It also said 205 new cases had been detected, bringing the total to 593.

Later, Health Minister Saeed Namaki announced that all schools would be closed for at least three days from Saturday as a precaution.

“We have a relatively difficult week ahead… as we see the trend, the main peak of the disease will be in the next week and coming days,” he told state TV.

A member of the Tehran City Council told Ilna news agency that “the number of infected patients may rise to 10,000 or 15,000” in the coming weeks.

The head of the World Health Organization’s emergencies programme, Dr Michael Ryan, said on Thursday that the apparent high mortality rate in Iran indicated its outbreak might be more widespread than realised.

A WHO mission is due to arrive in Iran on Sunday or Monday to help.

Dr Ryan said on Friday that its departure had been delayed due to “issues with getting flights and access to Iran”, but that the United Arab Emirates was helping.

Some health experts have questioned the actions of the Iranian authorities since the first cases of Covid-19 were reported nine days ago.

President Hassan Rouhani has ruled out placing any cities or areas in quarantine, despite the head of the joint WHO-Chinese mission on Covid-19 saying such measures had helped “changed the course” of the outbreak in China.

There has also been concern about the decision not to close the Shia Muslim shrine of Hazrat Masumeh in Qom, which is visited by millions of pilgrims every year.

Some restrictions on access have nevertheless been imposed in recent days.

Mr Namaki told state TV that people would be allowed to visit the shrine once they had been given hand-sanitising gels, health information and face masks.

“[They must] not gather together in groups – just pray and leave,” he said.

The shrine’s custodian, Ayatollah Mohammed Saeedi, has said that it should be kept open as a “house for cure” and that “people should be encouraged to come”.

Vice-President for Women’s and Family Affairs, Masoumeh Ebtekar, and Deputy Health Minister Iraj Harirchi are among several senior officials who have been infected.

The Hamshahri Online website reported that Ms Ebtekar – the highest-ranking woman in the Iranian government – had attended a meeting with President Hassan Rouhani and a number of ministers shortly before testing positive on Thursday.

Iran has also been the source of dozens of cases in neighbouring countries, including Afghanistan, Bahrain, Iraq, Kuwait, Oman and Pakistan.