Why is Iran’s coronavirus mortality rate higher than in other countries? 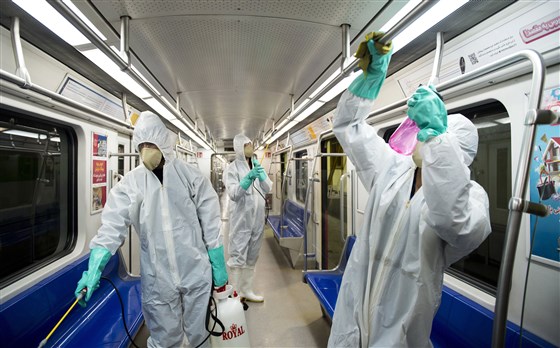 WASHINGTON — Iran has the highest reported number of deaths from the coronavirus outside China, raising questions about how the government is handling the public health crisis and whether the often secretive regime has been fully transparent about the extent of the outbreak.

Iran’s health ministry spokesman said on Wednesday that 19 Iranians have died out of a total of 139 positive cases.

Apart from China, where it was first detected in December, Iran has recorded the most deaths from the new form of coronavirus. There have been 2,715 deaths in China, out of a total of more than 78,000 confirmed cases.

Amid a shortage of surgical masks and hand sanitizer in shops, public health experts say Iran could become the hub of a major outbreak across the Middle East, especially given its porous borders with unstable countries at war or in turmoil.

Iranian officials reported the first case of virus in the religious city of Qom last week, and coronavirus has spread to at least seven other provinces. Other countries in the region, including Iraq, Kuwait, Oman and Afghanistan, reported their first cases this week and said the patients had recently visited Iran.

In an echo of public reaction in China, critics of the Iranian regime in and outside the country are questioning whether officials in Tehran have given the public a full and accurate picture of the outbreak. But Iranian officials have rejected any suggestion that they are playing down the epidemic.

The head of Medical Science University in Qom, Mohammad Reza Ghadir, said on state television that the Health Ministry had banned releasing figures on the outbreak in the city.

Asked how many people had been placed in quarantine, Ghadir said, “The Health Ministry has told us not to announce any new statistics.”

Ghadir also said that “most of the tests have to be done in Tehran, and Tehran announces it.” His comments suggested that diagnostic tests were mainly being conducted in the capital.

Outside medical experts said reporting on the total number of cases of infection in Iran was possibly lagging behind reporting on deaths. That could be because Iranian authorities are missing less severe cases across the country because of how they are testing and diagnosing patients, because of how information is shared or because of flawed medical equipment.

“This appears to be a reporting issue,” said Yanzhong Huang, director of the Center for Global Health Studies at Seton Hall University and a senior fellow for global health at the Council on Foreign Relations. “Reporting on the cases of infections may have fallen behind the reporting on the deaths.”

It’s unclear whether Iran has the ability to find out how many people have been infected, which would require venturing out to towns and villages to conduct tests and not simply relying on who goes to large hospitals with severe symptoms, said Dr. William Schaffner, a professor of preventive medicine and infectious diseases at Vanderbilt University Medical Center.

“That means going to the neighborhood and knocking on doors and really aggressively trying to find cases,” Schaffner said in an interview. “I don’t know if they have that capacity. Many countries do not, and they don’t have that tradition in their public health systems. This would be a very new thing for them to do.”

Another possibility is that the patients are from an elderly, more vulnerable part of the population, Schaffner said.

If the virus “was introduced to a population that was older and as a consequence has a bunch of underlying illnesses, [that] could explain a high fatality rate,” Schaffner said.

A less likely explanation is that Iran’s hospitals had fallen short and patients were not getting the necessary medical care, Schaffner said. But he doubted that was the case, because Iran has a relatively advanced health care system.

Dr. John Torres, NBC News’ medical correspondent, said there is no evidence of a change in the genetic profile of the virus, so the explanation for the higher mortality rate likely has to do with how the Iranians are tracking cases of infection.

“The virus has not mutated elsewhere,” Torres said.

State media said Tuesday that a member of Parliament, Mamoud Sadeghi, and the country’s deputy health minister, Iraj Harirchi, who lead a task force battling the virus, have tested positive. The news came a day after Harirchi appeared at a news conference looking feverish, reaching for tissues to wipe his brow. He wore no mask as the ministry spokesman standing next to him expressed confidence about the government’s response to the crisis.

“I say this from the bottom of my heart. Take care of yourselves,” Harirchi said in a video he took of himself that was posted after his diagnosis became public. “This is a democratic virus. It does not distinguish between rich and poor, the powerful and not powerful. It may infect a number of people.”

Harirchi earlier had reacted with anger when an Iranian politician alleged that the number of deaths was much higher in Qom than the government had acknowledged. Harirchi also had appeared on television coughing during an interview.

The episode raised questions about how Iran is managing the crisis and whether officials are failing to disclose information to the public — and the rest of the world. Iranian officials are already under public scrutiny over the handling of the downing of a Ukrainian airliner in January. It took the military three days to admit that the plane had been shot down by an Iranian missile in error, triggering angry street protests.

Secretary of State Mike Pompeo said at a news conference Tuesday that “the United States is deeply concerned by information indicating the Iranian regime may have suppressed vital details about the outbreak in that country.”

“All nations, including Iran, should tell the truth about the coronavirus and cooperate with international aid organizations,” Pompeo added.

In Washington, top public health officials warned Tuesday that Americans should prepare for the spread of the coronavirus in communities across the country.