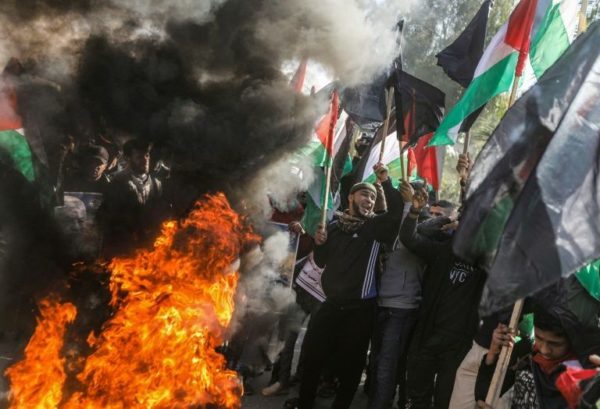 Lebanon’s Iran-backed Hezbollah group on Tuesday rejected U.S. President Donald Trump’s Middle East peace plan as a means to destroy Palestinians’ rights, and accused Arab states of being complicit in a “deal of shame” that bodes ill for the region.

The heavily armed Shi’ite group, which helped form Lebanon’s new government, said the most dangerous element of Trump’s vision for resolving the Israeli-Palestinian conflict was the naturalization of Palestinian refugees in Arab states.

“The settlement project under this deal is one of the biggest dangers and aims to do away with the right of return … and to create social and demographic tension and sedition that only serve the enemy’s interests and expansionist goals,” the movement said in a statement.

There are some 470,000 registered Palestinian refugees in Lebanon

The idea of permanently settling mainly Sunni Muslim refugees is highly sensitive in Lebanon, sparking fears of rocking its sectarian balance. The country maintains a power-sharing system among its many religious sects that fought a war between 1975 and 1990 that included Palestinian factions.

“There can be no peace if Palestinians are not granted their rights under an independent state … anything else will not succeed and cannot be imposed by the force of reality or the reality of force,” former Lebanese Premier Najib Mikati tweeted.

Hezbollah, which fought a month-long war with Israel in 2006, described the U.S. plan as a very dangerous step that would have serious negative consequences for the region.

“Hezbollah condemns and rejects the deal of shame that the savage Trump administration launched against the Palestinian people, their land, their holy sites and their legitimate and natural rights,” the group said.

“This deal would not have happened without the complicity and betrayal of several Arab regimes who are secret and public partners in this conspiracy,” it added, without naming the countries.