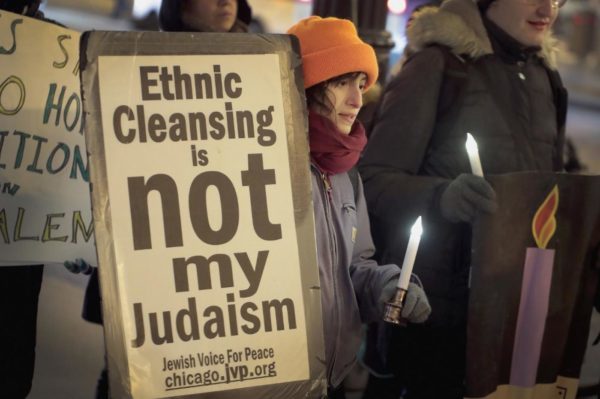 An advocate with Jewish Voice for Peace called the scheme “an apartheid plan” (AFP/File photo)
Share:

Several left-wing and liberal US Jewish organisations have rejected US President Donald Trump’s proposal to solve the Israeli-Palestinian conflict.

The plan, announced on Tuesday, would allow Israel to retain all of its settlements in the West Bank and annex the Jordan Valley in exchange for expanding Gaza’s territory and the promise of a demilitarised Palestinian state without control over its airspace or territorial waters.

“It is absolutely clear that the ‘plan’ released today by the Trump administration stands zero chance of serving as the basis for renewed diplomacy to resolve the Israeli-Palestinian conflict,” liberal group J Street said in a statement.

The organisation, which describes itself as pro-Israel and pro-peace, called Trump’s scheme a “culmination of repeated bad-faith” by the US administration to validate the agenda of right-wing Israeli politicians.

“By endorsing Israeli sovereignty over vast portions of the occupied West Bank, the president and his team appear to be empowering Israeli leaders to carry out unilateral annexations that would flagrantly violate international law, trample on the rights of Palestinians and grossly endanger Israel’s future as a democratic homeland for the Jewish people,” the group said.

Rabbi Alissa Wise, a top advocate with Jewish Voice for Peace, a grassroots organisation advocating for human rights for Israelis and Palestinians, called it “an apartheid plan”.

“International law, global consensus and decades of US policy concur that Palestinian land isn’t for Trump to give away nor for Netanyahu to steal,” Wise said.

“The only way forward towards lasting peace for Israelis and Palestinians is through justice, freedom, and equality for everyone.”

If Not Now, a progressive anti-occupation Jewish group, circulated a petition to oppose the plan.

“Trump’s entire strategy has been to disenfranchise Palestinians and deny their rights, their agency, and even their identity,” the petition says.

“Zero Palestinians were invited to the White House meeting about the plan or involved in the fake-process that led to this plan.”