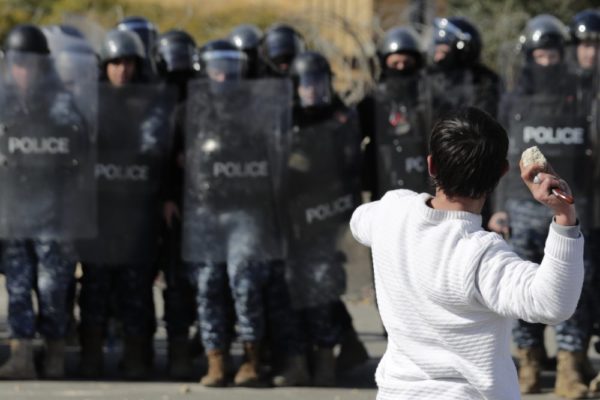 A protestor throws a stone at the riot police during a protest against the political elite in Beirut, Lebanon January 27, 2020. REUTERS/Aziz Taher
Share:

BEIRUT – Lebanon’s parliament passed the 2020 budget on Monday although its finance committee chief said the forecast revenues might be unrealistic as the country wrestles with a major economic and financial crisis.

The 2020 budget envisages a deficit of around 7% of GDP, the head of parliament’s budget and finance committee, Ibrahim Kanaan, told Reuters, wider than the originally hoped-for 0.6% with the economy shrinking and choked by a liquidity crunch.

As lawmakers convened to debate the budget, protesters hurled rocks at police who were deployed in force around parliament.

The budget was first drafted by Saad al-Hariri’s government before it resigned in October in the face of protests against the political elite that steered Lebanon into its worst crisis in decades.

Prime Minister Hassan Diab, whose cabinet took office last week with the backing of the Hezbollah movement and its allies, told parliament he would not obstruct the state budget.

Lebanon’s crisis is rooted in decades of state corruption and waste that have landed it with one of the world’s heaviest public debt burdens. Foreign donors have said any support to Lebanon will depend on it enacting long-delayed reforms.

French Foreign Minister Jean-Yves Le Drian said on Monday that Lebanon’s new cabinet must make changes. “The government must put into place indispensable measures,” he said. “It’s almost a question of its survival.”

Analysts say the new cabinet will struggle to win foreign support particularly from Gulf Arab states who, along with Washington, are alarmed by Iran-backed Hezbollah’s rising influence in Beirut.

During Monday’s parliamentary session, Kanaan said projected revenues might not be realistic because of a contraction in the economy.

Kanaan, a member of the FPM party founded by President Michel Aoun, also said interest rates should be cut or the state revenues would not be able to cover debt servicing. He added that he had heard rates would be cut “and we are waiting for the full commitment”.

Some parties boycotted the session, with critics arguing the new government should have won parliament’s vote of confidence first and then presented the budget itself.

Alain Aoun, an FPM lawmaker, said the state must find solutions to fund and reduce the deficit without making the Lebanese carry the burden.

“Can someone tell us today, in the government, the finance ministry, anywhere, how they will finance this $4.3 billion?” he said during the session, referring to the projected deficit. “Will they also take it from the deposits of the Lebanese?”

A hard currency squeeze has pushed up prices, hit the Lebanese pound, and driven banks to impose controls. Slideshow (5 Images)

Nassib Ghobril, chief economist at Lebanon’s Byblos Bank, said that the latest version of the budget was not public and that there was consensus that revenues would decline.

“With all the changes and the impact on the economy, I think it would have been more appropriate if the new government had withdrawn the budget and made revisions to it on revenues and expenditures,” he said.

Many protesters have rejected the new cabinet and accuse the ruling elite of ignoring demands which include an independent government and an end to corruption.

“We won’t stop. We won’t leave the streets until they are all pushed out,” said Abdelrahman Mohammed, among dozens of protesters in central Beirut. “We want to bring down the entire parliament, it does not represent us.”