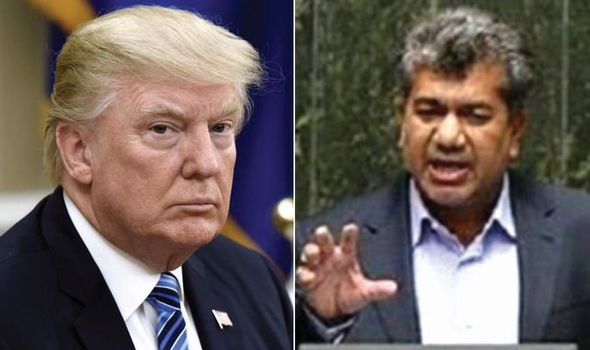 An Iranian lawmaker offered a $3 million reward to anyone who killed U.S. President Donald Trump and said Iran could avoid threats if it had nuclear arms, ISNA news agency reported on Tuesday amid Tehran’s latest standoff with Washington.

Tensions have steadily escalated since Trump pulled Washington out of Tehran’s nuclear agreement with world powers in 2018 and reimposed U.S. sanctions. The standoff erupted into tit-for-tat military strikes this month.

“On behalf of the people of Kerman province, we will pay a $3 million reward in cash to whoever kills Trump,” lawmaker Ahmad Hamzeh told the 290-seat parliament, ISNA reported.

He did not say if the idea of a reward had any official backing from Iran’s clerical rulers.

The city of Kerman, in the province south of the capital, is the hometown of Qassem Soleimani, a prominent Iranian commander whose killing in a drone strike ordered by Trump on Jan. 3 in Baghdad prompted Iran to fire missiles at U.S. targets in Iraq.

“If we had nuclear weapons today, we would be protected from threats … We should put the production of long-range missiles capable of carrying unconventional warheads on our agenda. This is our natural right,” he was quoted as saying by ISNA.

The United States and it Western allies have long accused Iran of seeking nuclear weapons. Tehran insists it has never sought nuclear arms and never will, saying its nuclear work is for research and to master the process to generate electricity.

The 2015 nuclear agreement as a whole was designed to increase the time Iran would need to obtain enough fissile material for a nuclear bomb if it wanted one – the main obstacle to producing a nuclear weapon – from around two or three months.

Under the deal, Iran received sanctions relief in return for curbing its nuclear activities. In response to Washington’s withdrawal from the pact and pressure from U.S. sanctions, Iran has gradually rolled back its commitments to the nuclear deal.

This month, Iran announced it was scrapping all limits on its uranium enrichment work, potentially shortening the so-called “breakout time” needed to build a nuclear weapon. Reports issued by the U.N. nuclear watchdog have suggested Tehran is still far from sprinting ahead with its work.

After its latest move to step away from compliance with the deal, European states Britain, France and Germany triggered a dispute mechanism in the pact, starting a diplomatic process that could lead to reimposing U.N. sanctions.

Iran said on Monday that Tehran would pull out from the Non-Proliferation Treaty (NPT) if international sanctions were reimposed on the country. The 1968 NPT has been the foundation of global nuclear arms control since the Cold War.

A U.S. envoy on Tuesday called an Iranian lawmaker’s offer of a $3 million reward to anyone who killed U.S. President Donald Trump “ridiculous” and said it pointed to the “terrorist underpinnings” of the Iranian government.

“It’s just ridiculous but it gives you a sense of the terrorist underpinnings of that regime and that regime needs to change its behavior,” Robert Wood, U.S. disarmament ambassador, told reporters in Geneva.