Trump is targeting Bernie Sanders in attacks, sees him a threat to his power 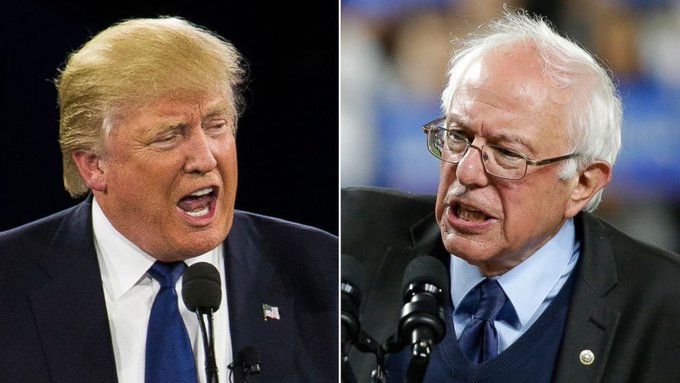 The Trump campaign put out two statements centered on Sanders this week, and the Vermont senator was at the top of the list of people the president attacked at his first rally of the year in Toledo, Ohio, on Thursday night.

“Bernie Sanders — crazy Bernie! — has condemned the US military strike on Soleimani, the world’s top terrorist,” Trump said in his first mention of a Democratic candidate at the rally. Sanders has led the Democratic field in unequivocally condemning the strike that killed Iranian Gen. Qassem Soleimani last week, solidifying his position as the anti-war candidate.

Until now, the Trump campaign has focused much of its messaging on former vice president Joe Biden, and Trump’s concern over the threat he could pose is at the center of the impeachment inquiry against the president. Email blasts sent by Trump’s rapid response director, Andrew Clark, typically target Biden, as well as the Democrats leading the impeachment inquiry, Nancy Pelosi and Adam Schiff. Since early last summer, the Trump campaign’s emails have mentioned Sanders only a handful of times — almost always as “Crazy Bernie” and grouped with other candidates running.

That’s shifted since the start of the year, with Sanders both raising more money than any other Democrat and rising near the top of some polls, an unlikely turn after a heart attack in October threatened to end the 78-year-old’s campaign.

On Wednesday, the day after Iran retaliated for the strike on Soleimani, the campaign sent around a statement saying “Bernie Sanders can’t be trusted to defend American lives.” The following day, it released a statement attacking the candidate more broadly, calling him a “wealthy fossil fuel-guzzling millionaire.”

“Bernie Sanders is dangerous,” Trump’s campaign spokesperson Tim Murtaugh told BuzzFeed News. “He believes that taking out the most vicious terror chief on the planet sets a bad ‘precedent’ and he uses the same talking points as the Iranians and Russians by calling it an ‘assassination.’ He cannot be trusted to keep Americans safe.”

Since entering the race this spring, Sanders has positioned himself in competition with Trump as much as with his Democratic rivals. In his pitch in Iowa and Midwestern states like Ohio and Michigan, Sanders has contended that he is the candidate who can peel away disaffected voters from the president in a general election, hosting events like a “Bernie Beats Trump” tour through Iowa counties that flipped from Barack Obama in the 2012 election to Trump in 2016.

The Sanders campaign said the shift by Trump signaled new concern. “It appears the Trump campaign has discovered what we’ve known all along, which is that Bernie Sanders is going to defeat Donald Trump,” Mike Casca, the Sanders campaign’s communications director, told BuzzFeed News. “Bernie, who has spent his entire life standing with the working class, is going to spend every moment of the general election reminding working Americans that Trump was lying when he said he would stand with them and that he would end the endless wars. He’s the most corrupt president in American history, and Bernie Sanders is going to sweep him out of the White House.”

Trump has targeted the white working-class voters Sanders has made central to his own campaign, and on Thursday he positioned the Republican Party as “the party of the American worker.”

“For decades, career politicians promised to defend the workers of Ohio and then they went to Washington and voted for the same globalist policies that devastated your communities and shipped away your jobs,” he told the crowd. “The Democrat politicians we are fighting today are the same ones who took a sledgehammer to Ohio jobs in factories and destroyed your factories and destroyed your jobs. They are losing and we are winning.”

Trump mentioned other candidates at the rally, including Elizabeth Warren, Pete Buttigieg, and Biden. He issued a lengthy tirade on the former vice president’s son, Hunter Biden. “I’ll tell you — I sort of hope it’s Joe,” he said. “Because he will hear ‘Where is Hunter?’ every single debate, nine times a debate.”