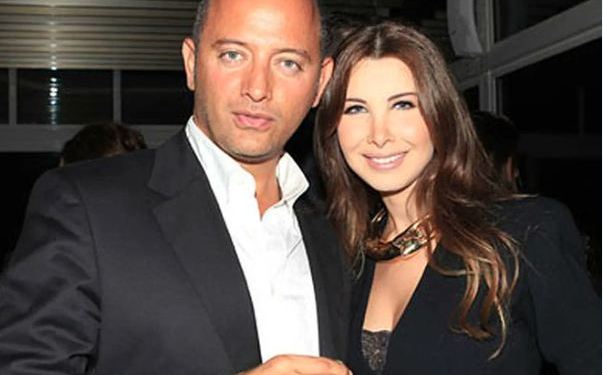 The husband of Lebanese popstar Nancy Ajram shot dead a burglar who broke into the couple’s villa in the Keserwan area of New Sehayleh at dawn Sunday.

Video shows the burglar carrying Ajram’s purse inside the villa and looking for items to steal before encountering the her husband, Fadi al-Hashem.

The husband carries a chair to confront the robber at this point, as the burglar brandishes a gun and asks him to put down the chair and get inside.

Al-Hashem said al-Moussa then asked him to give him money from his jacket, which he did, before the robber asked him where “the gold is stored.”

“Don’t oblige me to hurt you, Mr. Fadi, let your wife come here immediately,” the husband quotes the slain robber as saying.

A number of young men then arrive on the scene at Ajram’s request.

CCTV footage shows them searching for the burglar before he appears and threatens them with his gun.

He then enters the room of the couple’s children, as al-Hashem manages to get his own gun.

“I ran to him like a Kamikaze, I wanted to tear him apart, even if he shoots me,” al-Hashem says in remarks carried by MTV.

The CCTV footage then shows what appears to be the exchange of gunfire that left al-Moussa dead.

Ajram got a minor injury in her right leg, but her daughters and the rest of her family were safe. Lebanese Security forces went to the star’s villa at once and started investigations into the accident.

The Lebanese diva is always eager to post pictures on her official social media platforms with her children and husband, unlike many celebrities in the Arab World who prefer not to expose their family members to the public.

Ajram was born in May 1983 in in Achrafieh, Lebanon. When Ajram was 15 years old she released her debut studio album “Mihtagalak” (I need you) produced by EMI. The following year, she released her second album “Sheel Oyoonak Anni” (2001) (Take your eyes off me).

She was exceptionally accepted to the Syndicate of Professional Artists in Lebanon despite being under the legal age.

In 2003, and in 2007 she sold over two million records, ranking third best-selling female artist in Lebanese history. According to her website, she was described on the Oprah Winfrey Show as one of the most influential personalities of the Middle East.

Ajram was announced the best-selling Middle Eastern female singer of the decade (2000–2009).

Ajram has made the list of Most Powerful Arabs on Arabian Business several times, and was similarly listed by Newsweek as one of the most influential Arabs.

The clip reached over 25 million views on YouTube. That is no surprise as most of Ajram’s songs amass a high number of views on various social media platforms.

The song is directed by Samir Saryati, composed by Samir Nakhleh and written by Joseph Guha.