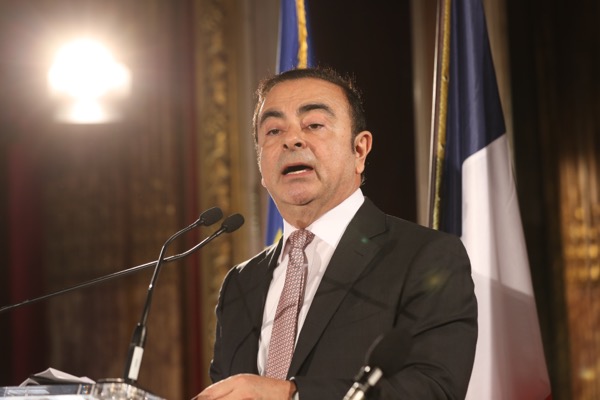 File Photo April 8, 2018 . Carlos Ghosn, a Brazilian-Lebanese-French businessman born in Porto Velho, Brazil, was until he was arrested in Japan in Nov 2018 the Chairman and CEO of France-based Renault, Chairman and former CEO of Japan-based Nissan, and Chairman of Mitsubishi Motors.
Share:

The Houdini-esque escape by Carlos Ghosn from his court-monitored Tokyo residence may be shrouded in intrigue, but one thing has been left in plain sight: A turnaround at Nissan Motor Co. won’t happen any time soon. Whatever he has to say from his refuge in Lebanon will be largely inconsequential for the Japanese car company.

Nissan is in a state of disrepair, and was so even before its globe-trotting former chairman (and ex-chief executive of Renault SA) was dethroned over a year ago amid allegations that included underreporting his income in securities filings and making personal use of company assets. He has denied wrongdoing.

As the scandal unfolded, much that was wrong at Nissan came to light, from shoddy corporate governance to vague disclosure. Ghosn had been intent on deepening ties between Nissan and Renault, an alliance fraught with tensions around the French automaker’s influence, as largest shareholder, on Nissan’s business decisions. Terms of the agreement between the companies are also hazy with little transparency in the public domain.

It hasn’t gotten any better. Various plans have been floated including behemoth mergers, but uncertainty hangs over the alliance, worsened by political wrangling between the French and Japanese.

Unsurprisingly, both companies ended the year as the worst-performing carmakers. Nissan’s financial results grew increasingly grimmer over 2019. In the six months ended in September, operating profit collapsed 85%. Net income dropped 73.5%. The company lowered predictions on how many cars it would sell in the full fiscal year.

After downgrading Nissan last month, S&P Global Ratings said it didn’t expect Nissan’s operating performance to improve for the next one to two years, even with reforms and rollouts of new models. It expects profitability to come under “further pressure.”

The stock price continues to dance around multi-year lows. In November, the company withdrew its dividend outlook and said it remains undecided, leaving investors in the lurch. That likely means the payout will be slashed.

All this seems at odds with lofty targets set by Nissan’s new overlords that seem unrealistic — like an operating margin of 6% and sale of 6 million units by 2022, especially with large restructuring expenses looming. The plan assumes flat fixed costs and rising investment, including 10% for research and development.

A top priority of Nissan’s transformation plan has been to overhaul governance — new committees and management, the works. But in December, Jun Seki, vice chief operating officer and No. 3 in the hierarchy, walked out within the first month of the new management team being installed. Seki was a well-regarded Mr. Fixit and had been at Nissan since 1986, playing a key role in building out the China business. In an interview with the Nikkei Asian Review, Seki said that he was now 58 years old and running out of time.   His departure will deny investors a major element of clarity around governance and also indicates how hard the overhaul will be.

Ghosn may allege more misdeeds inside Nissan, as he’s done in an earlier video message, and cast a pall over top executive ranks. For now, Nissan is in the hands of CEO Makoto Uchida, who most recently headed China. Regardless, avenues for change are narrowing. Global demand for autos is still weakening and the future of its alliance with Renault will likely delay meaningful and potentially contentious management decisions for Nissan. A lower dividend, for instance, could also make Nissan less valuable for Renault and further weaken its negotiating position.

Even as Japan Inc. changes its ways and activist investors circle, Tokyo hasn’t addressed the severe governance failures at Nissan with any concrete action. Regulators have recommended a 2.4 billion yen ($22 million) fine for underreporting Ghosn’s income. Enforcing some serious retooling atop Nissan may be one place to start.

Indeed, Ghosn may have been right: Nissan doesn’t seem to care as shareholder value keeps eroding. Truth be told, he didn’t appear to, either, given his modus operandi. But unlike Ghosn, Nissan can’t flee from its troubles. It’s in Japan to stay.

This column does not necessarily reflect the opinion of the editorial board or Bloomberg LP and its owners.