President Trump will soon have a Lebanese son-in-law, update 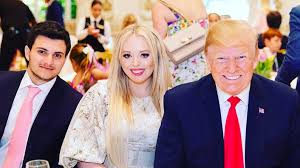 Washington, DC and Beirut , Lebanon – Michael Charbel Boulos , a young man of Lebanese descent will be getting engaged to U.S. President Donald Trump’s daughter Tiffany on January 11, according to invitations sent out by their two families, Lebanese media reported on Wednesday .

Tiffany has been quietly dating Michael , who grew up in Lagos,  Nigeria where his family owns a multibillion-dollar conglomerate that trades in vehicles, equipment, retail and construction.

Tiffany , 26, President Trump’s daughter from his former marriage to Marla Maples, met the London-based Boulos 25 , whose family is of Lebanese origin, on vacation in Mykonos, Greece, in the summer of 2018.

Marla Ann Maples is an American actress and television personality  who was the second wife of  president Donald Trump, They married in 1993 and divorced in 1999.

Boulos  whose family comes from the northern village of Kfaraakka in Lebanon attended an elite international school in Nigeria, Michael moved to London to complete his undergraduate degree

They recently attended the White House Christmas party with his parents Massad and Sarah Boulos.

Boulos senior is married to the daughter of Lebanese businessman Zouhair Faddoul, whom he worked with before founding his own ventures.

Michael and his family regularly go to Lebanon every  summer for the holidays, and his father even ran for parliamentary elections in 2018 before withdrawing his nomination. Boulos senior was involved with politics previously, being a part of President Michel Aoun’s Free Patriotic Movement before falling out with it and joining the Marada Movement, headed by former minister Suleiman Frangieh.

Tiffany is the daughter of Marla Ann Maples , an American actress and television personality  who was the second wife of  president Donald Trump, They married in 1993 and divorced in 1999.

Here is the invitation

Update : Michael Charbel Boulos says the invitation was all made up according to PALM BEACH POST .