Lebanon’s Diab is being perceived as Hezbollah PM by protesters, report 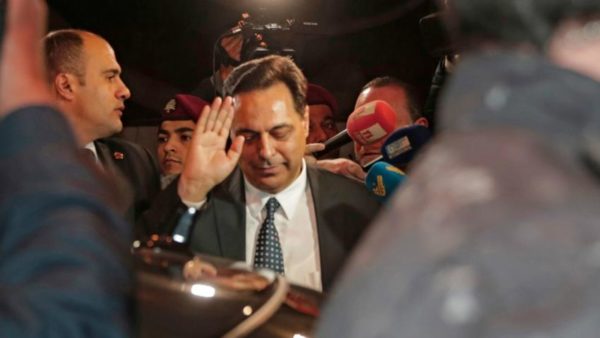 Lebanon’s president named a university professor and former education minister as new prime minister, in an effort to break a political deadlock amid an economic crisis and nationwide protests against the nation’s ruling class.

Hassan Diab, the designated premier, was backed by Hezbollah, a Shiite political and militant group that is allied with Iran and considered a terrorist group by the U.S and several European countries. Thursday’s move risked inviting broader international sanctions and impeding Western aid to Lebanon.

Mr. Diab, a Sunni, failed to secure the support of the country’s main Sunni bloc, a scenario that risks complicating efforts to form a government in Lebanon’s complex sectarian-based political system. President Michel Aoun picked Mr. Diab to head the government after consultations with lawmakers following Prime Minister Saad Hariri’s resignation in October in the face of protests.

In Lebanon, the prime minister is always a Sunni, the president a Maronite Christian and the speaker of parliament a Shiite. That division of the three top posts between the country’s main religious sects and politicians who have held power since the 1975-1990 civil war has stoked unrest in recent weeks. Protesters have blamed the power sharing system for Lebanon’s many problems and called for its overhaul. The protests have gridlocked the country and deepened its economic crisis.

“This type of government will have zero chances of getting the country out of the financial mess,” said Sami Nader, director of the Levant Institute for Strategic Affairs. “And it will not be able to get financial aid because it will be perceived as a Hezbollah government.”

The new prime minister will be racing against the clock as Lebanon’s currency flounders, its foreign reserves drop, local businesses close shop and its people grow increasingly impatient.

The peg of the Lebanese lira to the dollar, which has endured for more than two decades, is buckling. The price of sugar and rice has shot up by at least 25% as the currency weakened. Banks have limited dollar withdrawals and placed armed police outside branches as angry customers clash with bank employees after being denied access to their funds.

Protesters have called for a government made up of technocrats and experts who can work independently of sectarian allegiances to address the country’s challenges. Thursday’s announcement showed little sign of addressing those demands.

Haidar Haidar, a 60-year-old retired jeweller, said he had no faith in the country’s political elite.

“They have always broken the rules. So it is natural that we reject Diab because he is part of this system and we are against it,” he said, sitting by his tent in central Beirut, a part of town adorned with revolutionary graffiti.

Shortly after Mr. Diab’s designation, protesters shut down highways across the country, including roads leading to Beirut. Security forces increased their presence around Mr. Diab’s house in anticipation of rallies.

The police and army have intensified their confrontation with protesters over the past week, injuring dozens over the weekend and firing rubber bullets and tear gas.

“Those against my designation who are present in the street have a right to convey their opinion,” Mr. Diab said, according to statements carried by state media, adding that he won’t head a confrontational government. “Especially that for the past 60 days they have been present in the street rejecting the bad living conditions.”

Mr. Aoun’s twice-delayed talks with parliamentary blocs came after Mr. Hariri, who heads the country’s main Sunni bloc, on Wednesday withdrew his name for the nomination after parliamentary support for him crumbled and protesters opposed reinstating him in the position he vacated weeks ago. Mr. Diab was backed by 69 lawmakers in the 128-member parliament. He will begin consultations to form a government on Saturday.

Mr. Hariri’s party, the Future Movement, and his Christian allies, the Lebanese Forces, said they wouldn’t participate in a cabinet led by Mr. Diab. That leaves a larger share of cabinet posts in the hands of their current government partners Hezbollah and the Amal Movement, a Shiite group that also voted for Mr. Diab.

The arduous process of forming a cabinet is only the first obstacle for Mr. Diab as he takes on the task of steering the country out of a deepening economic crisis. He will also have to balance the competing interests of major foreign powers. Mr. Hariri is an ally of Saudi Arabia, and was preferred by the U.S. and Europe.

The West backed Mr. Hariri and his Future Movement partly as a bulwark against Hezbollah. Germany’s parliament on Thursday adopted a motion urging the government to ban Hezbollah from operating in the country.

Mr. Diab, a professor of computer engineering at the American University of Beirut, served as education minister from 2011 to 2014 but is considered a relative political outsider. On his Linkedin page Mr. Diab shared his 133 page CV, which includes a 31-page preface with entries such as “My Vision” and “My Story.” It also includes eight pages listing his awards and honors.

He beat Nawaf Salam, a Lebanese diplomat, jurist, and academic. Nawaf was elected on 9 November 2017 as judge on the International Court of Justice for the 2018-2027 term, having received a concurrent majority of votes in the United Nations General Assembly and Security Council. He served as Lebanon’s Ambassador and Permanent Representative to the United Nations in New York from 2007 to 2017. Hezbollah and its allies refused to vote for him because they said he had Washington’s backing.

“He is the U.S. candidate and that for us is enough for him to be rejected,” a Hezbollah spokesman said.

Here is how the parliament blocks voted during their consultation meeting with president Aoun. Only Hezbollah and its allies nominated Diab.