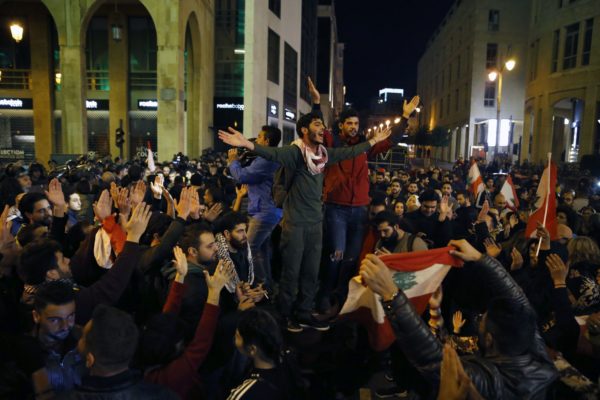 Protesters chant slogans during ongoing protests against the Lebanese political class, as riot police block a road leading to the parliament building in Beirut, Lebanon, Sunday, Dec. 8, 2019. A possible candidate for prime minister of Lebanon said Sunday he is withdrawing from consideration for the post, prolonging the country’s political crisis. (AP Photo/Bilal Hussein)
Share:

BEIRUT (AP) — Angry protesters attacked the municipality headquarters in Lebanon’s second largest city, Tripoli, on Tuesday, smashing windows and setting a room on fire, in an outburst of violence triggered by the collapse of a house overnight in the area that killed two siblings.

The attack in the country’s north came as heavy rainfall blocked roads and strained major infrastructure across Lebanon. The country is already roiled by anti-government protests and a plunging economy.

Many Lebanese hospitals may soon be unable to provide patients with life-saving surgery and urgent medical care amid the worsening financial crisis, an international rights group also warned on Tuesday.

For years, the Lebanese state has failed to pay its debts to public and private hospitals, making it more difficult for them to buy medical supplies and pay salaries.

“The Lebanese government’s failure to pay its bills to medical facilities seriously endangers the health of the population,” said Joe Stork, deputy Middle East director at Human Rights Watch. “While politicians horse-trade over a new Cabinet, the government is not responding to the desperate economic situation in the country and the clock is ticking on the ability of many doctors and hospitals to treat patients.”

The economic crisis has led to unprecedented capital controls by lenders. It has also affected imports amid a shortage of U.S. dollars that the Lebanese banking system heavily relies on. Lebanon imports most of its basic needs such as medicine, fuel, wheat and medical products.

Sleiman Haroun, the president of the Syndicate of Private Hospitals, told The Associated Press that the health sector is passing through “a very serious crisis” because doctors are facing a shortage of foreign medication and equipment.

Haroun said that importers of medical products have been saying since September that they have not been able to buy new stocks. This is causing shortages in urgently needed material, including stents for hearts, filters for kidney and blood bags, he added.

In Tripoli, a large military force was sent to the city to deal with the violence. The cause of the house’s collapse wasn’t immediately clear, but heavy rain appeared to have contributed. The two killed were a 19-year-old woman and her older brother, according to local media.

Tripoli has witnessed some of the largest protests since nationwide demonstrations broke out on Oct. 17 against widespread corruption and mismanagement. The protesters are demanding an end to the rule of the political elite that has run the country following the 1975-90 civil war.

Locals told the local LBC TV station that the collapse was the result of negligence, saying that the municipality has repeatedly ignored calls by the owners to renovate the old house. Their claims could not be immediately confirmed.

Lebanon’s state-run National News Agency said that the angry protesters damaged the office of the mayor as well as a municipality car that was parked outside the building. It added that the army later intervened and prevented further violence.

The violence came a day after Lebanese soldiers had to separate protesters and the bodyguards of a lawmaker after scuffles broke near his house in Tripoli.