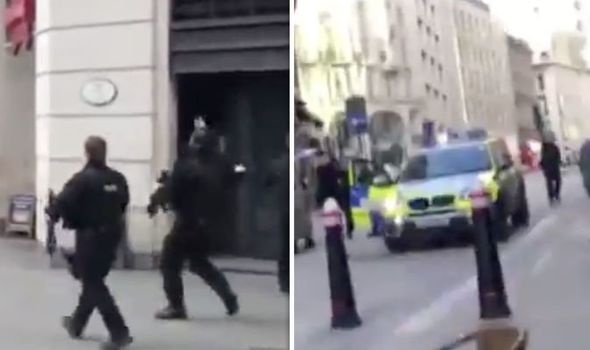 Witnesses have described how they “ran like hell” after hearing gunshots following a knife attack on London Bridge.

At least one civilian has been killed and several others were injured in the stabbing, which police are treating as terror-related.

A man was shot by officers on the bridge following the attack. Police say a suspect has been detained.

Witness Jackie Bensfield, 32, described how she asked to be let off a bus on the bridge after she heard “five or six” gunshots.

The nurse departed the bus and then “ran like hell” to escape the shots.

Another witness Amanda Hunter, who was also on a bus across the bridge when she heard shots fired, said: “(The bus) all of a sudden stopped and there was commotion and I looked out the window and I just saw these three police officers going over to a man.”

She told the BBC: “It seemed like there was something in his hand, I’m not 100% sure, but then one of the police officers shot him.”

Connor Allen, who was in his van on the bridge when it was evacuated, said: “Everyone just started running, you heard these pops and that was it. We just got out the van and started running.”

Another witness Reem Yousef said: “I was below the bridge, about 30 metres to one side of it. I heard shouting. I looked up and it appeared to be potentially four or five people – it looked like it was a fight.

“Then I heard someone shouting ‘get back, get back’.

“People started running across the bridge and then I heard two gunshots and at that point obviously I ran.”

One witness wrote on Twitter: “I’m in Borough Market after shots have been heard on London Bridge. The bridge is cordoned off. The market has been evacuated.

She later posted: “Tourists are screaming, shop owners urged into their shops.”

Joe, currently being held in his office following the incident, told Sky News: “We saw loads of police cars heading towards the bridge. We saw a man on the ground and police pointing guns at him. We later saw a lady being carried away from the scene.”

He said there was a “pretty tense” atmosphere.

He said more than 10 police cars were at the scene and officers were “running around with guns getting every one away from the bridge”.

An onlooker called Zack said police officers almost knocked him over as they ran towards the incident.

“Then loads of cars with sirens all rushed past me at full speed,” he said.

Guardian columnist Owen Jones was also in the area.

“I cycled right into the area where the incident had happened and was stopped on my bike as the entire area was cordoned off,” he told Sky News.