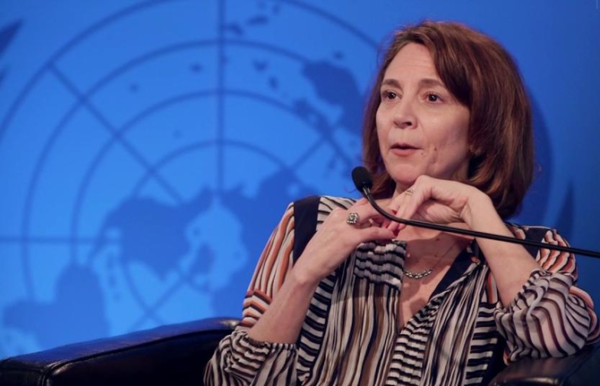 Lebanese journalist Roula Khalaf will become the first woman to edit the Financial Times in its 131-year history after Lionel Barber, Britain’s most senior financial journalist, said he would step down. The Financial Times  made the announcement  on Tuesday
By Alex Barker, FT
Roula Khalaf has been appointed the next editor of the Financial Times, succeeding Lionel Barber, who is stepping down after a 14-year tenure that put the news organisation on a profitable footing even as its traditional print business was upended.

In an email to staff on Tuesday, Mr Barber announced his 34-year career at the paper would end in January when he leaves “the best job in journalism” and is replaced by his deputy, Ms Khalaf.

Speaking to a packed newsroom, Mr Barber said he was proud of “restoring the gold standard in FT journalism” and building a sustainable business during “tumultuous times”. After more than 14 years in the role, he said it was a “natural moment” to hand the reins to Ms Khalaf, adding that “she is fair, she is wise, and she is tough”.

Ms Khalaf has held the FT’s second-most senior editorial post since 2016. Her career at the newspaper has included running the FT’s 100-strong network of foreign correspondents and leading its Middle East coverage during the Iraq war and the Arab uprisings of 2011.

Born and raised in war-torn Beirut, Ms Khalaf will be the FT’s first female editor since it was founded in 1888. She said she was “thrilled” to be chosen to lead “the greatest news organisation in the world”.

Tsuneo Kita, chairman of Nikkei, the FT’s proprietor, said Ms Khalaf’s 24-year career at the paper had proved “her integrity, determination and sound judgment . . . I have full confidence that she will continue the FT’s mission to deliver quality journalism without fear and without favour.”

During his tenure Mr Barber, 64, oversaw the shift away from the print advertising model that underpinned the FT’s business for more than a century, building a digital publishing strategy and developing a readership of more than 1m subscribers.

The FT also came under new ownership in 2015 after it was bought by Nikkei Group, Japan’s biggest media organisation, for £844m from Pearson, which had been its home since 1957.

Despite a sharp decline in print sales, the FT under Mr Barber returned to the black, reporting £25m profit last year on revenues of £383m. Subscriptions account for roughly 60 per cent of content revenue, and about 70 per cent of readers are outside the UK.

Ms Khalaf’s challenge is to further build an international subscription base amid fierce competition from specialist digital start-ups, the deep-pocketed Bloomberg News service and established rivals such as the New York Times and Wall Street Journal.

During his address to staff in the FT’s historic Bracken House headquarters, which the newsroom moved back to this year, Mr Kita described Mr Barber as “a trusted friend” who was crucial to the success of the partnership with Nikkei.

Choosing Mr Barber’s successor had been one of his “biggest jobs”, Mr Kita said, as he described taking soundings from several veteran FT figures on the “superb list” of candidates.

Ms Khalaf is a French and Arabic speaker who studied in the US before starting her journalism career as a business reporter at Forbes magazine. Some of her work there was fictionalised in Martin Scorsese’s Wolf of Wall Street.

Mr Barber steered the paper through the financial crisis of 2008 and Brexit vote of 2016, a period of dramatic upheaval for the FT’s core readership. He started his career as a business reporter at the FT in 1985, going on to serve as Brussels bureau chief, news editor and US managing editor.

Alan Rusbridger, the former editor of the Guardian, congratulated him for a “great innings” at a newspaper “edited with humanity, integrity and flair”.