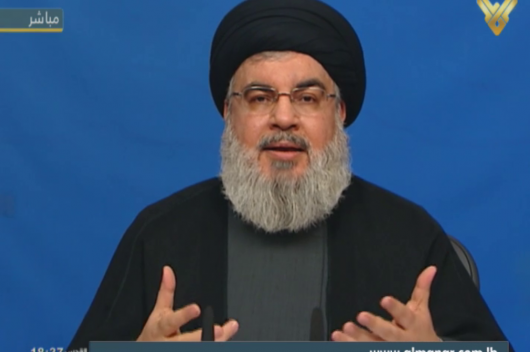 The leader of Lebanon’s Iranian backed Hezbollah militant  group said on Monday that political talks on forming a new government were still underway, and he would not discuss the matter publicly because he wanted to leave the “door open”.

In a televised address, Hezbollah leader  Hassan Nasrallah said: “When it comes to the government formation … the meetings are ongoing and the discussions are underway in the country. I will not discuss this matter … and we will leave the door open.”

Addressing the issue of corruption by Lebanese politicians  in Lebanon  , he said

“In my capacity as Hezbollah’s secretary general, I call on the Higher Judicial Council and the competent judges to tackle any corruption file targeting any Hezbollah official… You can start by us.”

He accused the US of being behind the current economic situation in Lebanon:

“The United States is playing a role in the current economic hardships in Lebanon.” Nasrallah said .

Addressing the situation in Iran, he said

” Trump’s strategy on Iran has failed.” He added ”  There will be no war on Iran in the region.”