Planeloads of cash from Russia have been shipped to Venezuela 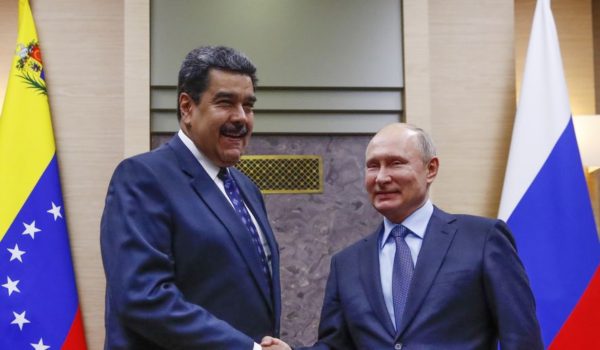 Russian President Vladimir Putin, right, shakes hands with his Venezuelan counterpart Nicolas Maduro during their meeting at the Novo-Ogaryovo residence outside in Moscow, Russia, Wednesday, Dec. 5, 2018. According to Washington Times 400 Russian military contractors were sent to Venezuela in support of Maduro. The Kremlin is worried that time is not on Maduro’s side .(Maxim Shemetov/Pool Photo via AP) more >
Share:

Hundreds of millions of dollars in cash has been shipped from Russia to Venezuela, providing a lifeline to the South American country as U.S. sanctions limit its access to the global financial system. A total of $315 million of U.S. dollar and euro notes were sent in six separate shipments from Moscow to Caracas from May 2018 to April 2019, according to data reviewed by Bloomberg from ImportGenius, which compiled Russian customs records it obtains through private sources. The cash came from lenders run by the countries’ governments and went to Venezuela’s development bank, the records show.
While the money could be for any number of things — like Venezuela repatriating cash held overseas or dividends from a stake in a Moscow-based bank or revenue from sales of crude or gold — the complex logistical feat shows one of the ways President Nicolas Maduro’s administration has sought to skirt aggressive U.S. financial sanctions. As a consequence of the scrutiny, the central bank is is conducting more transactions in cash, sometimes offering local clients access to euro bills.
ImportGenius’s data goes through April this year. That month, about $97 million in notes were sent in two loads from Moscow-based bank Evrofinance Mosnarbank to Venezuela’s Banco de Desarrollo Economico y Social de Venezuela, or Bandes. Evrofinance is a joint venture between Bandes and Russia’s state property management agency.

In January, $113 million worth of 100-euro bills were sent from state-controlled lender Gazprombank, which at the time had a stake in Evrofinance. The same entity shipped $50 million in U.S. dollar bills just two days earlier, and two separate shipments of unspecified currency totaling $55 million were made in May and July of last year.

Press officials for Evrofinance didn’t respond to requests for comment. Requests made to Bandes through Venezuela’s Finance Ministry were redirected to the Information Ministry, which didn’t respond.

A Venezuelan government official, who asked not to be identified discussing sensitive matters, confirmed the country had received cash shipments tied to Evrofinance but declined further comment.

Gazprombank spokesman Anton Trifonov declined to comment on any cash shipments but noted that “the correspondent account of Bandes with Gazprombank, as well as any cooperation between the banks, was totally terminated in March 2019.”
The Venezuelan regime has gone to great lengths to maintain access to hard currency as the U.S. crackdown leaves it isolated from conventional financial systems, with major banks mostly refusing to do business with Maduro. Among other ventures, the regime has used secret gold sales to raise funds, while also studying the possibility of using cryptocurrencies or a Russia-run global payment system to send money.

Bandes was sanctioned in March by the U.S., which alleged Maduro uses the bank’s accounts to keep a substantial amount of money abroad, mostly in Europe. The officials said the Venezuelan government had started moving funds away from the central bank, shifting them to Bandes. Last year, Evrofinance was selected by the Maduro government to handle some payments to its suppliers, which were urged to channel international transactions through the Moscow bank. Later that year, Venezuela appointed a former Evrofinance board member as a top official in the nation’s banking system.