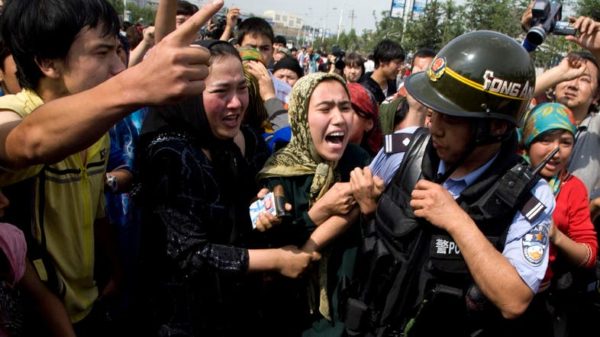 The Trump administration put visa restrictions on Chinese officials Tuesday amid ongoing abuses of Muslim minorities in the Xinjiang region.

Secretary of State Mike Pompeo said the measures target officials “who are believed to be responsible for, or complicit in, the detention and abuse of Uighurs, Kazakhs, or other members of Muslim minority groups” in the territory in northwest China. It follows the administration’s move on Monday to blacklist 28 public security entities and companies alleged to be involved in surveillance and detention of minority groups, effectively restricting U.S. companies from doing business with them.

“The United States calls on the People’s Republic of China to immediately end its campaign of repression in Xinjiang, release all those arbitrarily detained, and cease efforts to coerce members of Chinese Muslim minority groups residing abroad to return to China to face an uncertain fate,” the top U.S. diplomat said in a statement.

In a subsequent tweeted statement, Pompeo said “China has forcibly detained over one million Muslims in a brutal, systematic campaign to erase religion and culture in Xinjiang.”

The move adds to tensions between the U.S. and China only two days before high-stakes trade talks resume on Thursday in Washington. Unease has increased this week even as the world’s two largest economies hope to strike a deal to end a damaging trade war.

Earlier Tuesday, China pushed the U.S. to remove sanctions and stop what it called meddling in China’s internal affairs.

“We strongly urge the U.S. to immediately stop making irresponsible remarks on the issue of Xinjiang” and to “stop interfering” in “China’s internal affairs, and remove relevant Chinese entities from the list of entities as soon as possible,” a spokesperson from the ministry said Tuesday in a statement, according to a Google translation.

Human rights groups charge that China has engaged in the arbitrary detention, surveillance and torture of Uighurs and other Muslim minorities. Authorities have detained at least 1 million people in camps in the Xinjiang region, according to estimates reported by multiple outlets.

The U.S. in recent days has increased its pressure on China to end the abuses. The moves from the State and Commerce departments are only the latest flashpoints in a tense relationship between Washington and Beijing.

Also this week, organizations and businesses in China moved to cut off relationships with the National Basketball Association after Houston Rockets general manager Daryl Morey tweeted in support of the pro-democracy movement in semi-autonomous Hong Kong. China’s communist regime has opposed the movement for self-determination in Hong Kong.