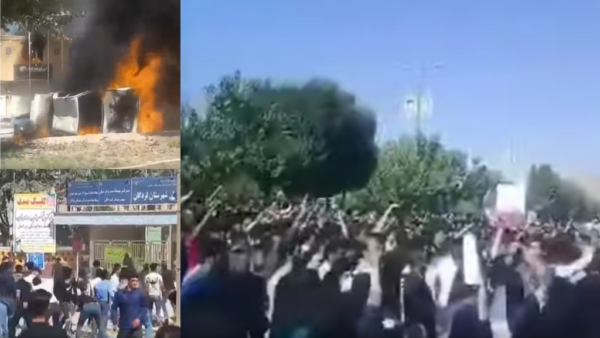 Protesters in the southwestern Iranian town of Lordegan on Oct. 5 set fire to the office of the town’s Friday prayer imam. They were angry about rumours of an accidental HIV infection in the nearby village of Chenar Mahmoudi.
Share:

Angry villagers in southwestern Iran Oct. 5 burned their local imam’s office following rumours that as many as 300 people had been infected with HIV during a diabetes-screening programme. The Health Ministry said the total number of HIV-positive people in the village was between 70 and 90, and that many of the infections dated back several years. Two HIV specialists told the France 24 Observers it is statistically inconceivable that one contaminated needle could infect 300 people.

The violence took place in Lordegan, a town in Iran’s Chaharmahal and Bakhtiari Province. Residents of a nearby village, Chenar Mahmoudi, had started protesting in the town Oct. 2. According to local media reports, they claimed that 300 people in the village had been infected by a nurse using a single needle contaminated with HIV, the virus that causes AIDS.

The Health Ministry said a nurse had conducted a diabetes-screening program during the summer in the village. It said the nurse administering the blood tests committed no errors, and used disposable test kits, not needles. Health Minister Saeed Namaki said Oct. 3: “There is no connection between the HIV cases and our screening program. The HIV cases are result of intravenous drug use and unprotected sex.”

Local townsfolk joined the protests, and on Oct. 5 there were violent clashes at the town of the imam’s office, the governor’s building and the local office of Iran’s Health Ministry. Police reportedly fired warning shots and tear gas, and made numerous arrests. Protests were also reported in the city of Isfahan, with people calling for transparency about the cause of the HIV infections.

The village of Chenar Mahmoudi, 30 km from Lordegan, has a population of 1,890 people. Citing Health Ministry records, MP Hossein Ghorbani on Oct. 2. said there were an estimated 240 drug users in the village, 20 of them intravenous addicts. The Health Ministry, which administers safe-needle programmes and tracks drug use, says it had already recorded 26 cases of HIV in the village before the summer, most of them drug users.

Deputy Health Minister Alireza Raeisi on Oct. 7 told the IRNA news agency: “We have run HIV tests on 1,400 people in Chenar Mahmoudi. We found 70 confirmed cases. We estimate that a total of about 90 persons are HIV positive in the village.” Raiesi said some of the HIV infections took place as far back as 7 to 10 years ago. He did not say whether the HIV tests were conducted at the same time as the diabetes screening.

Dr Omid Zamani, an AIDS researcher based in Tehran, has been in contact with medical workers in the Lordegan region since the controversy began.

“According to official figures there are 240 registered addicts in the village. Twenty of them are intravenous drug users, and almost all of them are HIV-positive. I’d call it an “old colony,” because contamination by sharing needles among addicts takes time. Blood tests show that some of the users have been HIV-positive for a long time.

We’ve seen this kind of transmission in other locations in Iran. What usually happens is that a male member of a family is infected by using a shared needle. Then he has unprotected sexual relations with his wife. He passes the virus to her, and then it can be passed on to the child in her womb.

They’re blaming the blood tests because they don’t know anything about HIV. First off, it’s impossible to imagine that a nurse in Iran would use the same needle to take blood from multiple patients. Nurses in Iran are well-trained and there are plenty of needles everywhere in the country. Medical staff routinely provide clean, free needles to the addicts. Even if a nurse had psychological problems and wanted to infect an entire village using a single needle, it’s statistically impossible. The chance of transmitting HIV via a contaminated needle is only 0.3 percent; that means three people per 1000 injections. It’s statistically inconceivable that one needle could infect 300 people.”

The controversy around the case has created a lot of animosity toward the HIV-positive villagers and a crisis of confidence in the local health system. The medical authorities are going to have a hard time running the proper follow-up tests to confirm who is HIV-positive and who is not. In Iran like everywhere else there is a three-step screening system for HIV.

There are “rapid test” kits and so-called ELISA tests that look for telltale antibodies, and PCR tests that look for the HIV virus itself. Many of the villagers have just had an initial test. They need a second test to confirm whether they have the virus or not. Cases that are confirmed need to be accompanied with medical advice and psychological counseling. That hasn’t happened in Chenar Mahmoudi, and that’s making the problem worse.

Hamidreza Setayesh, UNAIDS’ former country coordinator in Iran, also told the France 24 Observers team that it is statistically inconceivable for one needle to infect 300 people during a single screening programme.

“They want the nurse to be executed”

The Observers team also spoke to one of the few journalists to have visited the village and interview its residents. The journalist requested anonymity for this article because it is appearing in non-Iranian media.

“There’s a lack of information and education about HIV in the region, and that has caused big problems for the residents of Chenar Mahmoudi. People from other villages insult them by calling them “Aidsi” (person with AIDS). People refuse to buy their agricultural products, saying: “Their tomatoes might be infected”. There’ve been cases of kids being expelled from their school because they are from Chenar Mahmoudi and the other parents think they might have HIV. Some teachers have refused to work in the village because they think they might get HIV in the classroom. Factory workers have been threatened with dismissal. People from other villages steer clear of the people from Chenar Mahmoudi because they think they can get HIV just by talking to them.

Another problem is the huge stigma attached to HIV-positive women in this very conservative region. Many people call any woman with HIV a “whore.” When they heard the minister blaming the infections on “risky behaviour”, they thought he was saying they had cheated on their husbands. The women in the village said that wasn’t the case, so they looked for another explanation for their infection. One man told me his 50-year-old mother had tested positive. He told me: “They have no shame. She is a good Muslim, you can ask everyone. How dare they say my mother committed adultery?”

The only explanation people in the village could find is to blame the infections on the blood tests that were run two months ago by the local health office. They want the nurse to be executed.”