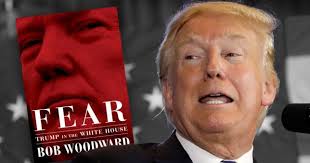 WOODWARD is best known for his role exposing the Watergate scandal that led to Richard Nixon’s resignation from the presidency
Share:

At his second appearance in Spokane, Washington, in as many days, the famed Watergate sleuth discussed the precarious situation GOP lawmakers find themselves in as Trump faces controversy for encouraging foreign countries to investigate Joe Biden, a political rival, and his son Hunter.

“I know Republican senators, and they are choking on this,” Woodward said on Friday, according to the Spokesman-Review. “Whether they say that’s too much, I don’t know.”

Some Republicans in the upper chamber have begun to break ranks after Trump openly encouraged Ukraine and China to investigate the Bidens on Thursday. Among those who have vented publicly are Maine Sen. Susan Collins, Nebraska Sen. Ben Sasse, and Utah Sen. Mitt Romney, as well as Texas Rep. Will Hurd in the House.

Trump, who claims his overtures were about corruption and not crippling a political opponent in the 2020 election, repeatedly castigated Romney on Saturday, even calling for his impeachment.

In a discussion with college students on Thursday, Woodward said the situation for Trump is getting “more serious each day” and predicted that impeachment in the House “is almost certainly going to happen to Trump.” He added, “But then there’s a trial in the Senate.”

On Friday, Woodward acknowledged that Trump encouraging foreign countries to investigate the Biden family is “probably not criminal,” but he nonetheless referred to the controversy as being wide in scope. Speaking of the House impeachment inquiry, Woodward said, “They’re looking through a keyhole, and it’s a panorama.”

Woodward also noted how some Republicans in the Senate are seeing an advantage from the Democrats’ impeachment venture. He mentioned that Sen. Lindsey Graham, a former Trump critic who has become one of his most vociferous defenders, is seeing an influx of donations. Woodward said the South Carolina Republican told him he “couldn’t count the money fast enough.”