Protests in Lebanon over the worsening economic situation 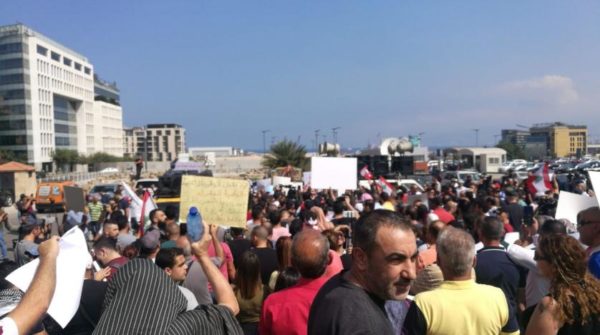 Hundreds of demonstrators were protesting Sunday in central Beirut an economic crisis that has worsened over the past two weeks, with a drop in the local currency for the first time in more than two decades.

Some of the protesters in Beirut’s downtown blasted Lebanese political leaders, blaming them for widespread corruption in the country.

The protesters gathered Sunday in the central Martyrs Square then marched toward the government headquarters in Riad al-Solh where they scuffled briefly with riot police.

Elsewhere in Lebanon demonstrators blocked a road in Baalbeck , with burning tires , in protest against the worsening economic situation near Labweh and Nabi Othman; another blocked the road near Zahle’s Ablah; and the third group blocked a road in Zahle’s Ferzol with cars they parked in both lanes.

The recent events have raised awareness of the country’s deteriorating  economic and financial situation. The ability of the state to service its sovereign  debt has been called into question, setting off a wave of austerity measures by authorities.

The shortage of the dollar restricted the ability of many traders to import key items like wheat , fuel and medicine which prompted (Banque du Liban) CBD to issue instructions to regulate the provision of funds to import these key items

Lebanese media this week reported that banks and money exchange houses were rationing their dollar sales over a feared shortage in reserves.

But central bank governor Riad Salameh on Monday denied that Lebanon was facing a dollar crisis.

BDL said on Tuesday it will issue a circular to regulate the provision of funds to import wheat, fuel and medicine.

Growth in Lebanon has plummeted in the wake of repeated political deadlocks in recent years, compounded by eight years of war in neighbouring Syria and friction between the Iranian backed Hezbollah militant group and Israel.

The Lebanese economy depended greatly on tourism and most of the tourists used to come from the Arab Gulf countries , but Hezbollah’s relations with Iran has drastically reduced the number of Arab tourists to Lebanon for security reasons.

Remittance inflow to Lebanon from Lebanese diaspora in the Arab Gulf countries has been drastically reduced due to tension in the Gulf between Iran and Saudi Arabia. Remittances from the Gulf represented in the past over 60 % of the total inflow.

Remittances in Lebanon averaged 570.71 USD Million from 2003 until 2018, reaching an all time high of 1378 USD Million in the fourth quarter of 2004, months before former PM Rafik Hariri was assasinated

Lebanon’s public debt stands at around $86 billion — higher than 150 percent of GDP — according to the finance ministry.

Eighty percent of that figure is owed to Lebanon’s central bank and local banks.

Ratings agencies Fitch and Moody’s bumped Lebanon down to “CCC” over what they called “intensifying pressure on Lebanon’s financing model”.

Standard & Poor’s kept Lebanon’s “B-/B” rating, but said that could slide over the next year if banking system deposits and the central bank’s foreign exchange reserves continued to fall.

In July, parliament passed its 2019 budget, which is expected to trim Lebanon’s deficit to 7.59 percent of GDP — a nearly 4-point drop from the previous year.