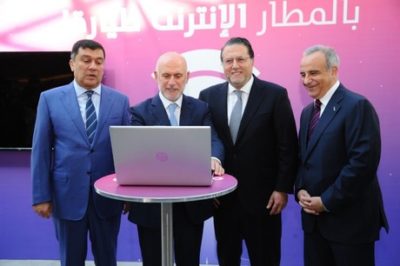 “Beirut’s airport is the first in the region to provide 5G service for its passengers,” declared  Telecommunications Minister Mohammed Choucair from the airport where he announced the news.

Choucair thanked all the parties that collaborated to take this move:

“We thank the General Manager of OGERO and the Middle East Airlines. We hope to see an improvement not only at the airport but throughout Lebanon.”

“The [internet] service is available to everyone,” Kreidieh said, though later he added that the 5G service was available only in the airport’s lounges.

A Wi-Fi internet connection was previously provided at the airport by IDM and was available for travelers leaving or arriving at the airport for 30 minutes.

Kreidieh said the internet service will now be managed by Ogero, and will be available through fiber-optics in 175 Wi-Fi points throughout the airport. It was not immediately clear if the free service had a limited duration.

As smartphone technology has advanced, customers have seen multiple generations of data technology emerge in the past few years. It started with 3G, then progressed to 4G LTE, and now people are starting to hear whispers of a 5G version on the horizon. Here  are some of the advantages and disadvantages of 5G technology

Advantage: Increased Bandwidth for All Users

For those who don’t know, the bandwidth is the amount of “space” available for people who are using data to download files, view internet pages, and watch videos. The less bandwidth that is available, the slower everyone’s devices will run. One of the advantages of this new fifth generation of wireless technology is that there will be more bandwidth on the data networks . Many people have memories of 3G technology as they watched the progress bar load their web pages. On 5G, this will be a worry of the past. This means that people won’t feel like they are fighting for data with all of the other users when they enter crowded spaces such as sports arenas and airports. With more bandwidth available, people will also be able to use this bandwidth to do more with their devices, making them more versatile than ever before.

While people on 3G and 4G networks may remember struggling to download files or watching videos buffer for minutes on end, this will not be a problem with 5G networks. Because of the increased bandwidth, people will be able to use more of it without crowding out other users. With more of the network dedicated to each individual smart device, smart devices will be able to run faster than ever before.

One of the key advantages of 3G cell towers was that they could cover immense territory with relatively few cells. This is because the network did not require as much bandwidth, meaning networks had to deploy fewer cells. When technology progressed to 4G networks, the cells were producing more bandwidth, meaning the coverage radius of each cell was smaller. People may have noticed that their coverage may drop more often than on their 3G network. As the 5G network gets rolled out, this trend will continue. More cell towers will be required to produce this immense bandwidth because the cells are not able to cover as much space as a 3G or 4G cell. Because more cells will need to be rolled out, 5G users should expect that their coverage may not be as widespread at first.

Disadvantage: The Radio Frequency May Become a Problem

Radios, cell towers, and even satellites communicate using radio frequencies. Frequency is measured in Hz and the radio frequencies tend to operate in the GHz range. Early reports on the 5G network indicate that this network is going to transmit its data in the range of around 6 GHz. Unfortunately, this radio frequency range is already crowded by other signals, such as satellite links. With numerous types of signals operating in the range of 6 GHz, it is fair to wonder whether or not the overcrowding is going to pose a problem as people try to transmit their data signals at this frequency. Will there be issues sending and receiving signals? Time will tell as this network frequency starts to spread.

Early research and reports on 5G technology indicate that smart devices operating on a 5G network may be able to operate at speeds that are thousands of times faster than on a 4G network. With the initial development of smart devices, tasks that could only be performed on a desktop or laptop computer in the past could suddenly be performed on a smart device, such as email and web browsing. As network speeds have increased, more and more tasks are being transitioned from the world of computers to the world of smart devices. With the increasing network speeds, this could open new doors for smart device technology that may not have been available. What kind of exciting new applications will be developed for smart devices running on a 5G network? What kind of doors will this increased speed open?

While the 5G network may still be under development, there’s no doubt that exciting information is coming from the researchers and reports. There is already a race going on to see who will release the new wireless technology first. With every new generation of data network, there are always advantages and disadvantages to discuss. The question is how the network intends on capitalizing on its advantages while shielding its users from its deficiencies that will ultimately determine its success. This information is important because users will want to know what impact a 5G network is going to have on their usage of smart devices.