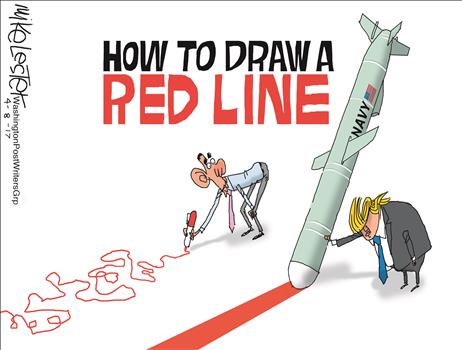 Trump has now shown himself just as willing as President Obama to make empty threats that damage American credibility. The problem with the Trump administration’s policy on Iran isn’t that it won’t go to war. It’s that it keeps constructing policies that require the use of military force to achieve objectives, when the president has repeatedly made clear he’s unwilling to take that step. The administration points a gun, but won’t pull the trigger, and that will encourage other adversaries to challenge America in other theaters.

President Donald Trump reversed himself, calling off the attack against Iran already under way to retaliate against the destruction of a U.S. drone operating in international airspace. Having warned, “If Iran wants to fight, that will be the official end of Iran,” but then balking when his bluff was called, Trump has now shown himself just as willing as President Barack Obama was to make empty threats that damage American credibility.

Trump has actually done much worse than Obama did with his “red line” comment, since Obama didn’t commence operations only to then send a panicked message through an emissary assuring Iran’s leaders that he wanted negotiations instead, or publicly downplay the nature of the threat. Trump did both of these things, after providing with Congress “very strong and compelling evidence” that Iran had sabotaged two tankers in international waters. And he contradicted public, factual reports made by the military command.

The architect of this successful Iranian policy is the head of the Quds Force, Qassem Soleimani. As Michael Weiss describes him, Soleimani “is seen as the one man who outsmarted three U.S. presidents, using their own myopic policies to his farsighted advantage, starting with the invasion of Iraq, continuing onto the failure to confront Assad, and culminating in the fixation on ISIS as the sole security challenge in the neighborhood.” Soleimani must be incredulous over his victory. In the past several weeks, Iran has attacked two tankers in the Gulf of Oman; fired missiles six times at U.S. bases in Iraq; helped Houthi rebels in Yemen fire rockets at Saudi civilian airports, injuring 23 civilians; and now caused a major disruption to commerce by proving that the skies over the gulf are unsafe for passage.

It’s difficult to determine whether Iran accurately anticipated that Trump would prove unwilling to use military force in retaliation (a power move) or lashed out because the Trump administration’s “maximum pressure” sanctions are domestically destabilizing the regime (an outgrowth of weakness).The Beirut-based journalist Alex Rowell argues that “the Iranians are very astute readers of the region, and also understand Washington better, frankly, than many Washington pundits.” But it doesn’t take carefully calibrated sensibilities to bet that a president who balked on his threats against North Korea, who obviously wants to disengage from the wars the U.S. is fighting, who has left unchecked Iran’s use of Hezbollah and other proxy forces to save the regime of Bashar al-Assad in Syria, and who, in the midst of a crisis over tanker attacks, claimed, “We just don’t want them to have nuclear weapons,” wouldn’t risk a war with Iran.

The president’s reprehensible behavior makes it virtually impossible for him to bring the country together, convince it that war is necessary, and, on the basis of that support, persuade America’s allies to join the fight. The president has mostly surrounded himself—with the notable exception of Director of National Intelligence Dan Coats—with people who, either by personality or because of the provisional nature of their Cabinet appointments, are disinclined to disagree with him.

In foreign policy, and Iran policy in particular, chaos rules. There appears to be no interagency process to vet alternative approaches or include the talent from departments in deliberations on policy. National Security Adviser John Bolton doesn’t serve either as an impartial adjudicator of the interagency or as an enforcer of the president’s views; instead, he advances his own strident policies, which the president publicly rebuts. The White House is populated by figures either unwilling to restrain the president’s erratic impulses or incapable of doing so. Max Boot is surely right that the most we can expect of this dysfunctional administration is “for Trump to veer, as he has with North Korea, from irresponsible saber-rattling to oleaginous appeasement.”

To be clear, Iran was destabilizing the region before the Trump administration, and the nuclear agreement did not attenuate Iran’s behavior. In fact, after the agreement was signed, Iran ramped up threats against freedom of navigation in the Strait of Hormuz, boosted efforts to use Shia militia as anti-American proxies in Iraq and as support for the Assad regime in Syria, and kept arming Houthi rebels in Yemen. Obama’s decision not to enforce his red line in Syria emboldened Iran further. But the lurching back and forth between “maximum pressure” policies and panicky pleas for negotiation is devastating to our ability to deter Iran. And not just Iran—America’s adversaries everywhere will detect the pattern of tough talk coupled with agitated appeals for negotiation.

The problem with the Trump administration’s policy on Iran isn’t that it won’t go to war. It’s that it keeps constructing policies that require the use of military force to achieve objectives, when the president has repeatedly made clear he’s unwilling to take that step. The administration points a gun, but won’t pull the trigger, and that will encourage other adversaries to challenge America in other theaters.