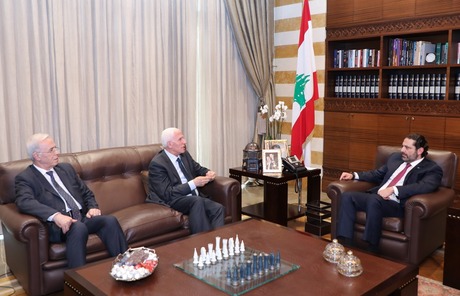 After the meeting, Al-Ahmad said: “We were honored to meet with Prime Minister Hariri in the framework of the permanent coordination between the Palestinian and Lebanese leadership. We discussed the political events in the region, especially those related to the Palestinian issue, which is the core problem of the region and its central cause, especially with the continued efforts of the US administration led by (US president Donald) Trump to impose its views on the Palestinian people and the Arab region, in the framework of the so-called deal of the century, in partnership with the Israeli right-wing government led by Netanyahu.”
He added: “We reaffirmed the joint Palestinian-Lebanese position of rejecting the deal of the century regardless of the names it is given. Lebanon and Palestine cannot accept less than the Arab peace initiative adopted by the Arab summit in Beirut, which affirmed the establishment of an independent Palestinian state after ending the occupation with East Jerusalem as its capital, and solving the refugees issue according to UNSCR 194. This is a permanent position for Lebanon and Palestine, and any normalization of the relations is absolutely unacceptable before the implementation of the Arab peace initiative, which has become an integral part of the resolutions of international legitimacy and the road map. This was decided by the international community.”
He added that the Palestinians and Lebanon would not participate in the Bahrain workshop “which will not succeed, and the boycott of Lebanon and Palestine of this workshop empties it of 90 percent of its substance”. He said: “PM Hariri expressed his satisfaction with the ongoing dialogue between Palestinian factions and Lebanese parties and the progress achieved until now, and with the security and stability in the Palestinian camps. He also expressed his appreciation for the courage of the Palestinian man, Saber Mrad, who stood against terrorism in Tripoli and saved his Lebanese brothers.”