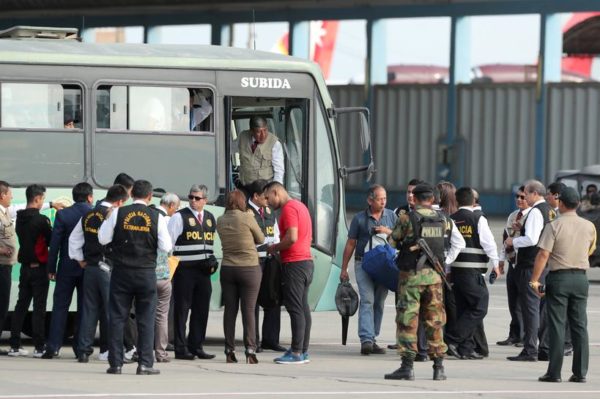 Peruvian immigration police escort Venezuelan migrants as they board a bus prior to their deportation, after being accused of concealing that they had criminal records, according to Peru’s Interior Ministry, in Lima, Peru April 29, 2019. REUTERS/Guadalupe Pardo
Share:

Peru deported more than 40 Venezuelan migrants for concealing they had criminal records or for residing illegally in the country, the interior minister said on Monday, in the first large expulsion since hundreds of thousands of Venezuelans fled to Peru to escape their country’s economic crisis.

The migrants were detained in different districts of the capital, Lima, in a police operation early on Monday, and were put on a military plane headed to Venezuela hours later.

Interior Minister Carlos Moran said most of the Venezuelans expelled had provided false sworn declarations in their residency applications that they had no criminal record, a violation of Peru’s migration law punishable with deportation.

Others were deported for residing illegally in the Andean country, Moran added, without providing details.

Peru, which has a population of 32 million, has the second-biggest population of Venezuelan migrants after Colombia. Most of the 700,000 Venezuelans in Peru came in the past year.

“As a country, we have fraternally welcomed thousands of Venezuelans who have come to seek a better future,” Moran told reporters. “But as a government, we must protect our citizens first, and these people who have entered lying, falsifying information, had criminal records, and that’s a threat.”

The deportation on Monday followed reports in local media in recent months about Venezuelan nationals involved in criminal rackets, including an alleged kidnapping-for-ransom gang that police said they disbanded last week.

Some 3 million Venezuelans have left their homeland since 2015, seeking to escape an economic crisis that has deprived many of basic foods and medicine, according to a U.N. estimate. A further 2 million are expected to emigrate this year.