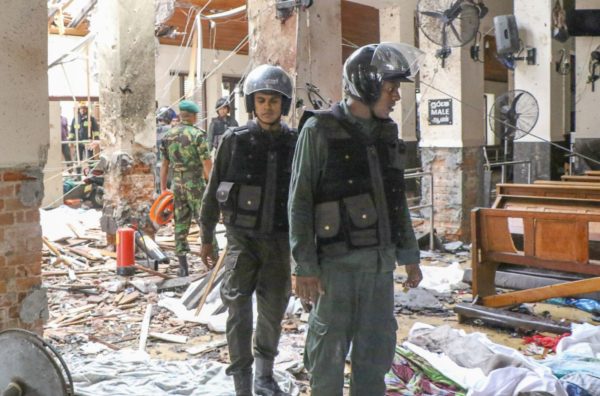 Security forces inspect the inside of St. Anthony’s Shrine after an explosion hit the church.Anadolu Agency/Anadolu/Getty Images
Share:

Seven people were arrested and three police officers were killed during a raid on a house in Colombo on Sunday as the death toll from a rash of bombings at churches and hotels in Sri Lanka rose past 200, police and local media said.

“Altogether we have information of 207 dead from all hospitals. According to the information as of now we have 450 injured people admitted to hospitals,” Police Spokesman Ruwan Gunasekera told reporters in Colombo.

Further details of the raid on the house in the Sri Lankan capital were not immediately available.

The eight explosions, some of which officials said were suicide bomb attacks, led to an immediate clampdown, with the government declaring a curfew and blocking access to major social media and messaging sites, including Facebook and WhatsApp

Nationalities of the victims

A Dutch national and a Chinese national also have been reported among the victims.

Two Muslim groups in Sri Lanka are condemning the attacks on churches and hotels in the country on Easter Sunday that killed more than 200 people.
The Muslim Council of Sri Lanka says it mourns the loss of innocent people in the blasts by extremists who seek to divide religious and ethnic groups.The All Ceylon Jammiyyathul Ulama a body of Muslim clerics, says targeting Christian places of worship cannot be accepted.Muslims make up about 10% of Sri Lanka’s population of 23 million.

No one has claimed responsibility for what Sri Lankan officials have described as a terrorist attack by religious extremists.