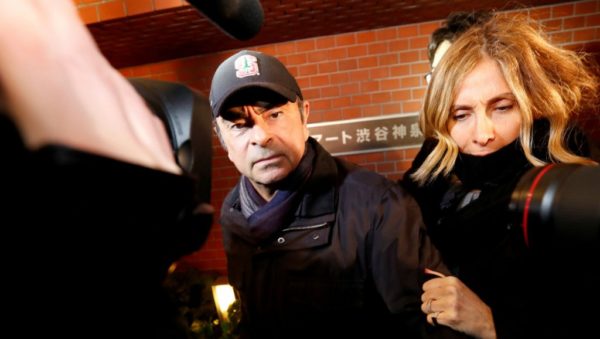 The wife of former Nissan boss Carlos Ghosn said she hastily left Japan and flew to Paris because she feared for her safety following her husband’s latest arrest last week.

In an interview with the French weekly, Journal du Dimanche, published Sunday, Carole Ghosn said she saw police take her husband back into custody and “felt in danger” when officers confiscated her Lebanese passport.

Japanese prosecutors arrested Ghosn for a fourth time on Thursday on suspicion he had tried to enrich himself at the automaker’s expense, in another dramatic twist that his lawyers said was an attempt to muzzle him.

She said she left for France on Friday using a different passport.

Detailing the latest twists in the extraordinary saga, Carole said her husband had recorded a video interview in English before his detention.

“He names the people responsible for what has happened to him. The lawyers have it. It will be released soon,” she told the newspaper.

Carole added that she had fled Tokyo on a flight to Paris — with support from the French ambassador to Tokyo — because she “felt in danger.”

“He didn’t leave me until the plane,” she explained. “Up to the last second, I didn’t know if they were going to let me fly. It was surreal.”

The role of the French ambassador could lead to fresh friction between the countries over the highly sensitive case, which involves Nissan and French car maker Renault, which were both previously run by Ghosn.

In an interview with the Financial Times before boarding a flight out of Japan late Friday, she said, “I think the French government should do more for him. I don’t think he’s had enough support and he’s calling for assistance. As a French citizen, it should be a right,” said Carole Ghosn.

Her husband, who holds French, Lebanese and Brazilian citizenship, has denied charges against him and also called on the French government for help.

France, which holds a 15 percent stake in Nissan’s alliance partner Renault, said it was monitoring the situation.

“We fully exercise consular protection. The French ambassador is in regular contact,” an official from French President Emmanuel Macron’s office said on Sunday.

“The wife of Carlos Ghosn has been received by the (Elysée) Secretary General during his (Ghosn) previous incarceration,” the official added.

Carole Ghosn said her husband’s previous 108-day imprisonment had left him “a different person” and that normal life under bail conditions had been impossible.

Japanese public broadcaster NHK said on Sunday that prosecutors suspected Ghosn siphoned off payments through a company where his wife is an executive to purchase a yacht and a boat.

The prosecutors asked her to meet them for voluntary questioning as an unsworn witness, but the request was turned down, which prompted them to ask judges to question her on their behalf, the broadcaster said.

Such a request gives judges the power to question on a mandatory basis witnesses who refuse to testify, according to NHK.

Japan’s judicial system under the spotlight

Prosecutors had confiscated his wife’s Lebanese passport in a dawn raid on their apartment in central Tokyo on Thursday morning, but did not discover her US passport, the Financial Times reported.

“I’m all alone here. It’s traumatising what happened,” she was quoted as saying while awaiting her flight.

Under Japanese law, prosecutors will be able to hold Ghosn for up to 22 days without charging him. The fresh arrest opens up the possibility that he will be interrogated again without his lawyer present, as is the norm in Japan.

The additional charge would likely prolong Ghosn’s trial, which is expected to begin later this year, his lawyer has said, adding that loss of access to Ghosn’s trial-related documents could put his client at a disadvantage in fighting his case.

Ghosn faces charges of financial misconduct and aggravated breach of trust over allegedly failing to report around $82 million in salary and temporarily transferring personal financial losses on to Nissan’s books during the financial crisis.

Released on $9 million bail on March 6, the executive says he is the victim of a boardroom coup.

The scandal has rocked the global auto industry and shone a harsh light on Japan’s judicial system.