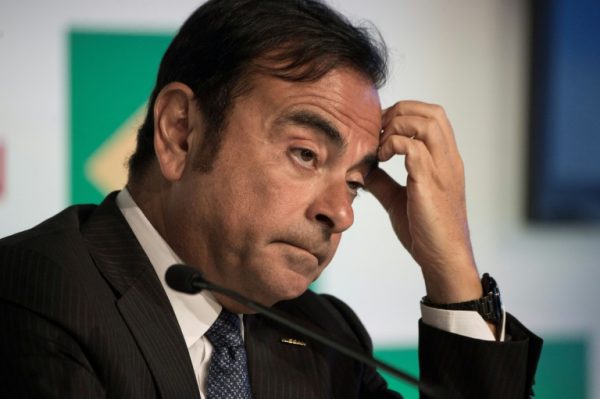 Authorities arrested the 65-year-old less than a month after he was dramatically freed on bail following more than 100 days in detention.

Local media said prosecutors had entered Ghosn‘s temporary accommodation in central Tokyo early Thursday morning and that he left with them by car shortly afterwards.

An AFP reporter outside the home saw three men in dark suits guarding the entrance to the building’s car park and a police officer patrolling, as dozens of journalists gathered.

Ghosn issued a statement through his representatives after the arrest calling it as “outrageous and arbitrary”.

“It is part of another attempt by some individuals at Nissan to silence me by misleading the prosecutors. Why arrest me except to try to break me? I will not be broken,” he said, insisting that he is innocent of the claims against him.

Reports emerged Wednesday that prosecutors were weighing rearresting Ghosn as they investigate claims related to at least $32 million in Nissan funds transferred to a distributor in Oman.

According to a source familiar with the matter, some of this money is believed to have been used to buy a luxury boat for Ghosn and his family.

The former high-flying executive already faces three charges of financial misconduct related to allegations he under-reported his compensation and sought to transfer losses to Nissan’s books.

He has denied any wrongdoing and took to Twitter for the first time Wednesday, using a newly created account that his spokespeople confirmed was authentic, to announce plans for a press conference.

“I’m getting ready to tell the truth about what’s happening. Press conference on Thursday, April 11,” said the tweet, sent in English and then Japanese.

Ghosn currently faces two separate charges of deferring his salary to the tune of nine billion yen ($81 million) and not revealing this in official documents to shareholders.

The Brazil-born auto sector pioneer, widely credited with saving Nissan from the brink of bankruptcy, also faces a charge of seeking to shift personal investment losses onto Nissan’s books and then using company funds to pay a Saudi associate who stumped up collateral for him.

The case has been a rollercoaster ride of unexpected twists and turns from the moment Ghosn was first arrested at a Tokyo airport out of the blue on November 19.

He has since been re-arrested on multiple occasions over a series of allegations, employed a little-used article of Japanese law to force a day in court and emerged on bail dressed in a workman’s uniform and cap in a bizarre attempt to avoid the media.

Since his release on bail on March 6, he has kept scrupulously quiet despite daily attempts by local and international media to interview him.

His lawyer Junichiro Hironaka, known as the “razor” for his mental sharpness, has done the talking for him, appearing twice in front of the foreign media to plead his client’s innocence.

In his latest appearance on Tuesday, Hironaka announced he had filed a petition with the Tokyo District Court so that Ghosn’s case would be heard separately from that of Nissan and his former right-hand man Greg Kelly.

Nissan has been indicted alongside Ghosn, as they filed the shareholders’ documents that allegedly mis-stated the then chairman’s income.

Hironaka said this would not be a fair trial as Nissan has effectively sided with the prosecutors by providing them with documents they say show further malpractice.

Under Ghosn’s management, Nissan recovered and formed a three-way alliance with Renault and Mitsubishi Motors that has become one of the world’s top-selling auto groups.

In an interview with AFP from his detention centre in January, Ghosn denounced a “trap” and a “plot” by Nissan prompted by opposition to his plans to bring the companies closer together.

He was removed as chairman by Nissan and Mitsubishi Motors almost immediately after his arrest. Renault was slower to react but Ghosn eventually himself resigned from the head of the French firm.

Ghosn’s arrest and a string of alleged financial misconduct has sparked questions over Nissan’s own corporate governance and the company established an independent body to propose changes to prevent a recurrence.

The advisory group suggested doing away with the vacant role of chairman and laid the blame for the lapse in governance at the feet of Ghosn.

The main cause of the misconduct was “the concentration of authority in Ghosn”, the group concluded.

“He created a situation in which it would be difficult to detect his pursuit of personal gain.”