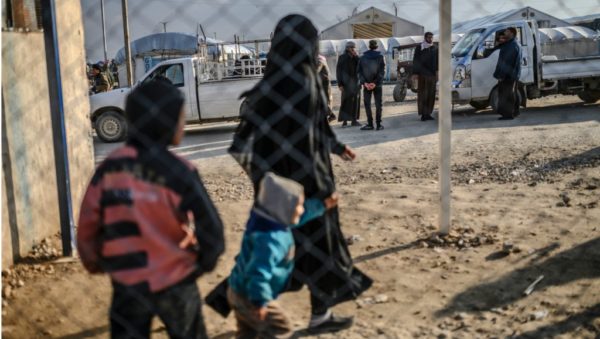 BULENT KILIC / AFP| One of the two detained French women who fled the Islamic State group’s last pocket in Syria walks with her child after speaking to a AFP reporter at al-Hol camp in the al-Hasakeh governorate in northeastern Syria on February 17, 2019.
Share:

Nearly 40 children are living without their European parents in camps in Syria after IS group lost its strongholds, including three sons of a suspected French female jihadist, now dead, whose French grandparents are asking to have them repatriated.

The three children, not older than five years old, are languishing in cold and muddy camps for the displaced in Syria‘s northeast, far away from their family in France. They are the sons of Julie Maninchedda, a suspected French female jihadist who was killed in shelling on a former Islamic State (IS) groupstronghold five months ago, and a captured German militant.

Now, the grandparents they have never met are trying to get them to France, imploring President Emmanuel Macron to show “humanity” and accept the children immediately.

Behind a fence, one-year-old Suleiman looks around the Kurdish-run Al-Hol camp, where tens of thousands of people displaced by the fight against IS group live alongside relatives of suspected jihadists. The baby’s face is marked with scars caused by shelling. The infant is being looked after by a South African woman who once lived in the jihadist proto-state.

He is one of nearly 40 children living without their parents in informal settlements in Syria’s northeast. According to Save the Children, more than 2,500 foreign children from over 30 nationalities are living in Kurdish-run camps. Nearly half of them fled ongoing battles against the jihadist group in eastern Syria.

‘It was too much’

Maninchedda was killed along with her second husband, a Moroccan IS group fighter, in October when shelling hit the village of Al-Shaafa in eastern Syria, two women who were in the area during the attack told AFP.

At the time of her death, she had been separated for several months from her first husband and the father of the three boys, Martin Lemke, a German jihadist who travelled with her to Syria in 2014. His departure led to the separation of their three sons Suleiman, Shahir, three, and Hassan, five.

The eldest left with his German father, Lemke’s two other wives, and their three children, while the other two stayed behind with their mother.

In late January, Lemke, his wives, and their children, surrendered to Kurdish-led forces after fleeing the village of Baghouz, the last IS group redoubt in Syria. Suspected of having worked with IS group intelligence, Lemke, was sent to a Kurdish-run detention centre after handing himself over to US-backed forces.

Meanwhile, his wives and children were trucked to displacement camps.

AFP met Lemke’s wives and children at a Syrian Democratic Forces (SDF) screening point outside the village of Baghouz this month.

Wearing a dusty red jacket and sandals that seemed too big, Hassan sat in a corner, silently staring off.

As for Shahir and Suleiman, Lemke’s two wives said they had entrusted them to a Syrian woman after the death of their mother.

“It was too much, I already had my two little children with me,” said Lemke’s youngest wife, Leonora. The Syrian woman brought the two children with her to the Al-Hol camp.

Suleiman and Shahir have since landed in the arms of two other women detained in the shelter, a South Africanand a German, who are suspected of joining the jihadists.

Nadim Houry, of Human Rights Watch (HRW), met Suleiman and Shahir in Al-Hol early this month and said they were physically abused by the Syrian woman.

Suleiman does not walk and does not speak, and Shahir, who is extremely thin and frail, struggles with recurrent stomach aches, Houry told AFP.

“The freezing cold, the rain, the wind, overcrowding and the lack of follow-up, makes living conditions in the camp especially atrocious for young children,” says Houry.

Hassan has landed in another camp in the northeast, the South African who takes care of his little brother told AFP.

More than 4,000 kilometres away, in northern France, Lydie Maninchedda, 56, learned last month that her only daughter, Julie, had died in Syria.

Along with her husband Patrice, she wrote to Macron to ask him to “show a little humanity” by sending the grandchildren to France. “God knows what they have lived,” she told AFP. “But they are very small, they have not done anything, we have to give them a chance to rebuild themselves, to have a life.”

France has said that it is considering transporting children held in Syria, starting with those who lost parents, but the authorities have not given a timeline.

Lydie Maninchedda is also campaigning for adults to come home. “It takes lawsuits in France to have answers,” she says. “Why did 1,700 French people go there? I do not know why France does not want to answer this question.”