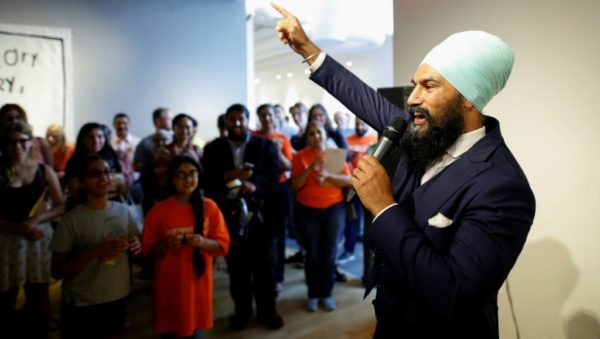 Jagmeet Singh, leader of the left-wing NDP, is the first member of a visible minority to lead a major political party in Canada, but he will have to win a seat in a by-election on Monday before he can challenge Justin Trudeau’s premiership.

Singh is standing in a by-election in Burnaby South in the Vancouver metropolitan area, a crucial test for the New Democratic Party (NDP) leader ahead of October’s general elections. He is by no means a dead cert to win: at the last federal legislative vote, in 2015, the party won this seat by a mere 500 votes. And in Monday’s by-election, the two main parties, the centre-left Liberals and the Conservatives, have put up candidates against Singh, breaking with the tradition that other parties do not run candidates against leaders.

Canadian politics operates according to the Westminster model, in which the executive is drawn from the legislature – so party leaders must have a seat in the House of Commons before they can become prime minister.

He became leader of the New Democratic Party (NDP) in October 2017, winning a plurality of the vote in the first round, after capturing public attention by becoming the first turban-wearing Sikh to take a seat in a provincial parliament, in Ontario in 2011.

‘We need to rethink what it means to be secular’

Singh was born in 1979, to parents from India’s Punjab region. Fluent in Hindi and Punjab as well as Canada’s official languages English and French, he grew up in Newfoundland on Canada’s sparsely populated east coast, before his family moved to the town of Windsor, Ontario, just across the US border.

After being called to the bar in 2006, Singh worked as a defence lawyer in the Toronto area until his election to the Ontario legislature. He has credited this work – especially pro bono work for underprivileged clients – as inspiring him to enter politics.

Indeed, Singh’s political platform is focused on social democratic policies aimed at reducing poverty and inequality. Notably, he advocates increasing the national minimum wage to 15 Canadian dollars (10 euros) per hour, legalising possession of all drugs (on the grounds that “it is not a criminal justice problem” but “a social justice problem and a healthcare problem”) and the removal of tax deductions on higher-rate taxpayers.

The NDP leader has also attracted attention with his opposition to Quebec’s proposed ban on public sector workers wearing religious symbols – which would prevent him from wearing his turban if he worked for the state in the French-speaking province. In an interview with CBC, the Canadian public service broadcaster, Singh argued that “we need to rethink what it means to be secular”, and said he feels he can wear a turban to work while still following Canadian secularism. On a Québécois talk show he added that “my objective is never to convince someone else to accept my identity – it’s to convince people that I share the same progressive values as them”.

Analysts say that Singh communicates his agenda with considerable charisma. “His leadership can be seen as refreshing. People saw him as this very telegenic, easy-to-like guy, who might be able to compete on the celebrity level with Trudeau,” Lori Turnbull, the director of the school of public administration at Dalhousie University, told the Guardian.

Yet – for all his charisma and forthright views on such issues as drugs and secularism – it seems likely that Singh will face a tough challenge in October’s general elections. An aggregate of voter intention surveys by specialist website Calculated Politics on February 21 predicts that the NDP will win a paltry 26 seats, compared to 156 for the Liberals and 141 for the Tories. By contrast, the New Democrats managed to win 44 seats in the 2015 elections.

In a column for Canadian daily the National Post, editorialist Chris Selley pointed out that the New Democrats’ may be polling poorly despite – not because of – Singh’s leadership: “The NDP has always been a party of contradictions   not so much a big tent as a tent city. It’s supposed to be a party of both champagne socialists and farmers, of both autoworkers and environmentalists, of both staunch multiculturalists and Quebec nationalists.”

Selley also argued that “if Singh wins his seat, there is reason to hope he might grow into the job. To skeptics [sic] he evinces a distinctly Trudeauvian brand of superficiality, and a similar gift for quotes that land well but fall to pieces if you actually read them back. That hasn’t hurt Trudeau, though.”

Singh has vociferously called for a public inquiry over the SNC-Lavalin scandal, in which Trudeau has alleged to have pressured the justice minister – who subsequently resigned – to help the Montreal-based engineering firm avoid criminal prosecution on corruption charges. However, it remains to be seen whether the NDP leader can capitalise on this issue ahead of the October elections.