Guaido: Venezuelan military should disown a leader who burns food in front of the hungry 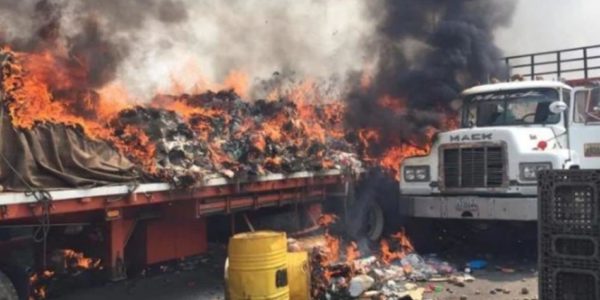 Venezuelan opposition leader Juan Guaido said  the military does not owe loyalty to a regime that burns food in front of hungry people.

While insisting he wouldn’t give up in his fight to deliver the aid, he didn’t ask supporters to continue risking their lives and make another attempt to break the barricades set up by President Nicolas Maduro’s socialist government.

But he did make one more appeal to troops to join the opposition’s fight for power.

“How many of you national guardsmen have a sick mother? How many have kids in school without food,” he said, standing alongside a warehouse where some 200 tons of mostly US-supplied boxes of food and medicine has been stockpiled.

The secretary general of the Organization of American States, Luis Almagro  called what has been going on in Venezuela “the worst thing I’ve ever seen in my life”.

“While the regime denies aid, children and sick are still dying. It’s the worst thing I’ve ever seen in my life. Violent killing and injuring people who moved medicine boxes.

“It demonstrated the savagery and barbarity with which the regime acted to prevent the entry of humanitarian aid. The international community must absolutely respond.”

Guaido announced that  he  will meet US Vice President Mike Pence at a meeting Monday of regional diplomats.

The emergency meeting of foreign ministers from the so-called Lima Group of mostly conservative Latin American nations was organized to discuss Venezuela’s crisis. It will take place in Colombia’s capital of Bogota.

Guaido, whom the US and some 50 nations recognize as Venezuela’s rightful leader, spoke from Colombian city of Cucuta alongside Colombian President Ivan Duque after a day of deadly clashes with security forces blocking the entry of humanitarian aid amassed on three of Venezuela’s borders.

Guaido  also praised those border guards who abandoned their posts and fled into Colombia, saying:

“We particularly value the military who have joined in recognizing Guaidó. That will be essential to regaining democracy.”