Pelosi tells Europe: Trump is not the boss 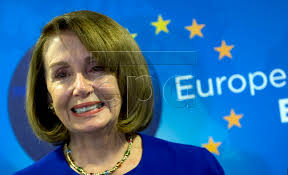 Pelosi and a delegation of U.S. lawmakers were in Brussels on Monday and Tuesday to reassure European partners at a time when transatlantic relations have been deeply fractured by Trump’s criticism of allies and his unpredictability in policymaking.

Among the messages that Pelosi said she brought to the EU capital was that the U.S. president is not all-powerful. Of course, it was a lesson Europeans watched her teach Trump in the standoff over a recent government shutdown — where she forced the president to back down.

“We’re not a parliamentary government even though we’re parliamentarians,” Pelosi said at a news conference. “We have Article 1, the legislative branch, the first branch of government, co-equal to the other branches and we have asserted ourselves in that way.”

Pelosi said that one European colleague had asked why the House of Representatives had only recently adopted a resolution in support of NATO. She said that she explained it is because she and the Democrats had only retaken control of the majority at the start of the year.

“I said because we just got the majority and then we can control, we can manage what goes on to the floor,” Pelosi said. “But once the Republican colleagues had the opportunity to vote on this, H.R. 676 NATO Support Act — what was it? 357 to 22 Noes. I think that that sends a very clear message.”

Pelosi added, “I don’t think that there’s any difference between Democrats and Republicans on our relationship with NATO. This is not partisan in any way.”

“In terms of the question — is this a reassurance tour? I think it’s a reminder tour,” Connolly said, “that the United States government is not just one branch. And as the Speaker said, Article 1, the first Article in the constitution of the United States deals with the powers of the legislative branch not the executive branch and those powers include war and peace and even direction of the armed forces.”

Pelosi then leaned back toward the microphone to interject: “And the power of the purse.”

Neither Pelosi nor any member of her delegation mentioned the president by name, but it was an unmistakable message to Trump back in Washington, where the president has declared a national emergency, intent on building his wall along the Mexican border even though Congress has denied him the money to do so.

A group of states has filed a lawsuit seeking to stop Trump, and the upcoming court fight will almost certainly test the balance of powers between the executive branch and Congress.

Pelosi and her delegation arrived in Brussels after attending the annual Munich Security Conference, where the deep fissures in transatlantic relations were on full display.

At the news conference in Brussels, Pelosi said that she and her delegation were in Europe “reaffirming our commitment to the transatlantic alliance, our commitment to NATO and respect for the European Union.”

The visit was clearly intended to draw a contrast between congressional Democrats and Trump, who has left America’s historic allies deeply unsettled, particularly by the unpredictability of his decisions such as surprise announcements of a drawdown of troops in Syria and Afghanistan and, over the weekend, a threat to release captured ISIS fighters if European allies don’t accept them and put them on trial.